For many people caught in traffic on Toronto’s notorious Don Valley Parkway, the Rainbow Tunnel is a welcome break. The tunnel’s entrance is painted in a bright rainbow pattern that’s been shining bright for over 40 years and has become one of the staples of the area. Many people have featured it in their photography and landscape painting, but one such painting just made someone millions of dollars. 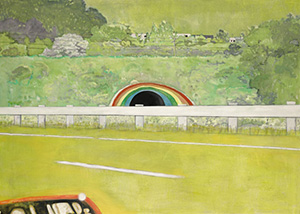 Scottish artist Peter Doig’s “Country-rock (wing-mirror)” is a landscape piece that prominently features the original mural. Doig’s work is usually landscape focused, but this one in particular was auctioned off to the highest bidder. Originally, it was thought the painting could reach $16 million.

As for the original mural, it’s history has less money attached to it. Commissioned in 1972, the mural is the work of Canadian muralist Berg Johnson. Johnson’s own relationship to the mural has a life of its own. He’s apparently been arrested multiple times for touching the mural up over its 40 year lifespan, but otherwise is a complete recluse. These rumours are debated and refuted by people, including his friends, but it all adds a certain history to the mural itself, something that probably attracted Doig to it for his painting, and probably influenced the eventual price of the painting at auction.

What the painting shows is the value of public art and murals while arguing how people consume and privatize these public pieces. The original muralist was duly compensated for his work, but it’s nowhere near the sum art collectors are willing to pay for the painting that features Johnson’s public art. Johnson himself, still active in Toronto’s mural scene, is unlikely to see money from the piece that clearly uses his past efforts to increase its value, respectfully or exploitatively. Of course, public art is just that, public, and attempts to police its dissemination invites the very kinds of control that limit artists in general.

But this also speaks to the role art still plays in the world. If Andy Warhol proved anything, it’s that the price of art, just like art itself, is highly subjective. After all, he painted replicas of one of the most common things in a grocery store, a soup can, and made millions of dollars and saw his art displayed around the world. Private art, the notion of being able to hide it away for a much smaller audience, is still worth more than something meant for everyone. And while some public art becomes private, like a recent Banksy piece on a house that was removed and sold at auction, the mural itself remains, at least monetarily, an art style unable to fetch the price of private art, even if its seen by many more people. At the end of the day, however, Johnson’s mural is a widely loved and easily recognized part of Toronto’s landscape, a public art piece every muralist aspires to have in their portfolio.

Global Street Art: The International View on the World of Street Art

StreetArtToronto: Bringing Street Art, Well, Back to the Streets

The Artist who Makes the Illegible Legible: Meet Mathieu Tremblin

At the Right Speed, These Roads Sing: The Idea and History Behind the Musical...
Scroll to top