Despite being one of the world’s fastest growing economies, Brazil still struggles with poverty. Many of the biggest cities in the country are surrounded and embedded with favelas, another word for slums, that are home to millions of people. These favelas suffer from problems all too familiar for poor neighbourhoods: violence, lack of access to services, forced migration, and more, but they are also home to blossoming cultural movements, distinct artistic qualities, and hope. People now travel to Brazil to explore everything the country has to offer, including the favelas, and Dutch artists were just two of these people. The difference is these artists stuck around to help the community through involvement.

Jeroen Koolhaas and Dre Urhahn, collectively known as Haas&Hahn, visited Brazil in 2005 to shoot a movie about favela hip-hop culture. Haas&Hahn were fascinated by the culture, art, and especially the people themselves, so they decided to give back to the communities that hosted their filming in a unique way: mural art. A great project for a section of Brazilian culture people seem intent on covering up.

The favelas have come under increased skepticism and persecution over the past decade, especially as Brazil geared up to host the FIFA World Cup this year. Programs to cover up, quite literally, the slums for a good face on the international stage have been in place since 2009. Originally designed to curb the growth, especially since favelas have been growing at a rate larger than the cities to which they are attached, many detractors of the walls also noted they did a pretty good job of blocking them from view. Many pointed to the upcoming soccer tournament, but others speculate that favelas also lower housing prices. In a country with severe economic disparity, the solution for some of the elite is to simply not address the problem. Unfortunately, the problem accounts for over 6% of Brazil’s population, is growing steadily, and getting international attention. For a part of Brazilian culture that is literally being covered up, mural art gives some colour and attention to these famously eclectic districts and the people that live there.

Before travelling to Brazil, Haas&Hahn had a history of big projects, painting entire buildings with murals that fit with the local culture and brought some flavour to neighbourhoods. But this was mostly in their native Netherlands and Europe. Brazil was a little bit different.

As much as favelas have a blossoming culture, they also have very real problems. Drug lords can run entire favelas, where they use the youth as armed muscle they affectionately call “soldados.” Getting into a favela can be dangerous and difficult. Doing something other than looking can cost you your life without the right permissions. So Haas&Hahn had to win over the people and the resident drug lords in their fight, which may be in part why only 3 such projects happened.

But permission was and is the name of the game with Haas&Hahn. Each project required permission from the residents of the favela and the people whose homes they would be painting. Designs were kept loose so residents could have an input in the colours and anyone who didn’t want to participate had their wishes respected.

Since 2007, Haas&Hahn have done a total of three favela painting projects in Rio de Janeiro, each with their own flavour and direction.

The first, “Boy with Kite,” is a smaller and more conventional mural. The mural is essentially its namesake, but the kite itself is nonexistent. Instead, a boy with a string looks out past the blue sky of the mural and towards the rest of the city, drawing the eye way from the mural and towards the favela itself. Rather than cover it up or try and distract from the slum, “Boy with Kite” encourages the viewer to see the surroundings. 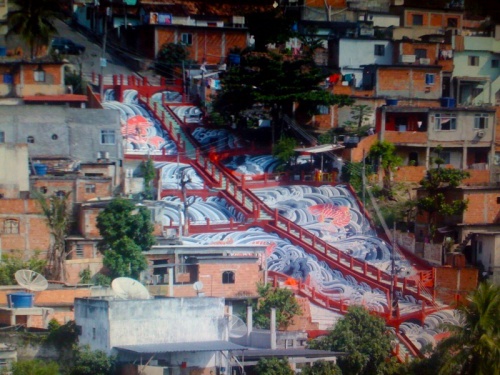 The second project is substantially more ambitious, tackling a series of stairs that lead up the hill of a favela Vila Cruzeiro, one of Brazil’s most dangerous and most populated slums, with an estimated population of between 40 000 and 70 000 inhabitants. Rio is a particularly hilly area of the world and the Vila Cruzeiro has a network of steps that lead all over its maze of streets, alleys, and walkways. For their second project, Haas&Hahn recruited local youth to turn one of these sets of stairs, and accompanying drainage pipes, into a cascading river of koi fish. Called “Rio Cruzeiro,” the project is substantially larger than “Boy with Kite” and incorporates the often fluid feel of a favela, which is often built without proper zoning or building codes, giving them a haphazard feel.

The most Haas&Hahn favela painting project Haas&Hahn was “Praca Cantao,” a full-scale mural project that painted the houses of an entire square. Painted with vibrant colours often associated with the favelas, the Praca Cantao square boats a vibrancy seen in the city’s energy and citizens, but not often in their actual homes.

But the key part of the favela paintings is possible not even the art itself, but the community involvement. The artists worked with local youth to give them hands-on painting skills and experience, something many have put on their resume to find employment away from their drug-controlled neighbourhoods. Rather than simply do something they perceive as nice for a group of people, Haas&Hahn got involved, worked together with the people, and left them with something to look at but also some skills to move forward.

Since Brazil, Haas&Hahn moved to slums a little closer to home, Philadelphia, where the poverty level is 167% above the national average. There, the murals have gotten even bigger stretching over 50 storefronts on two blocks. Organized with MuralArts, a program we’ve talked about before, Haas&Hahn’s murals continue to give a city once famous for smokestacks and steel production a new look. Other projects have also popped up in New York, Miami, and the Shenzhen Biennale in China. As for what’s next, Haas&Hahn raised over $100,000 to realize their dream project, painting an entire favela, on Kickstarter last year. They are currently scouting locations, deciding to start after the World Cup ended.

The Walldogs: Bringing Towns to Life with Mural Art
Scroll to top