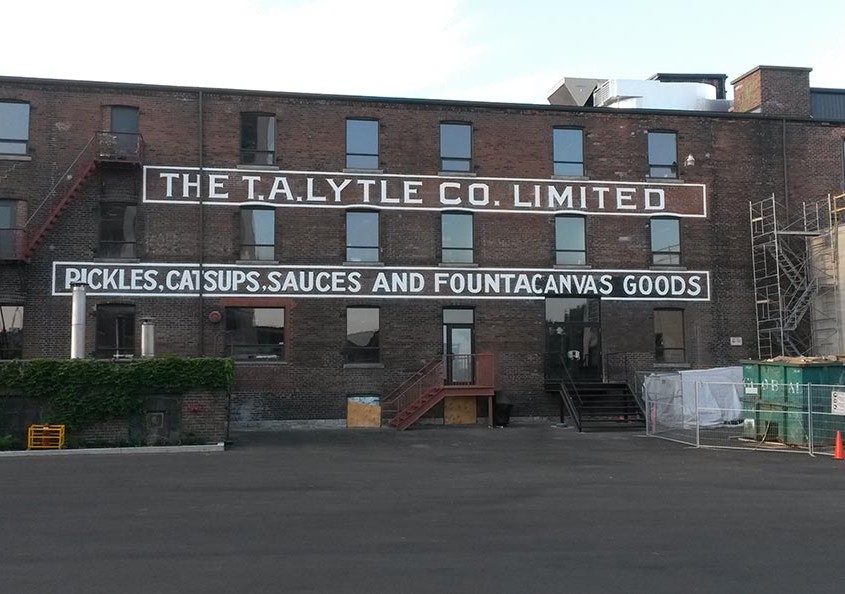 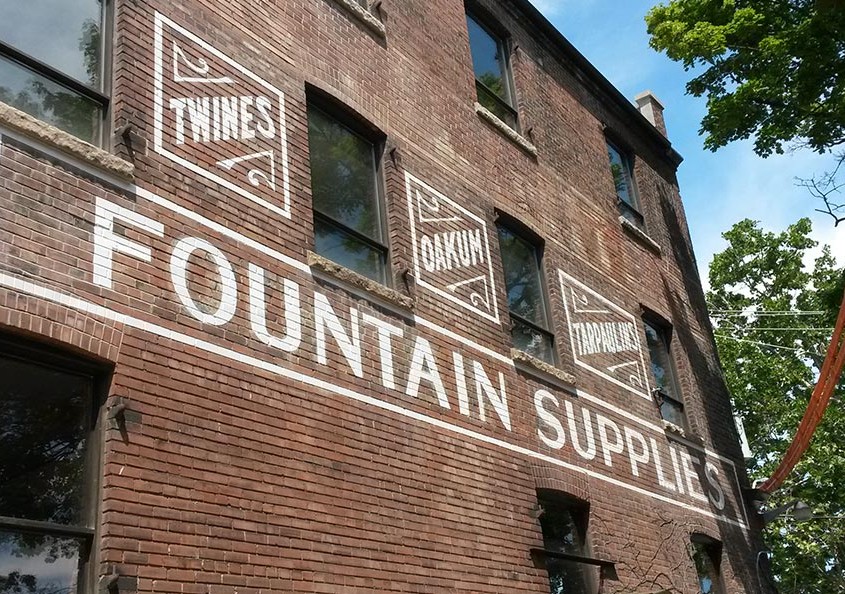 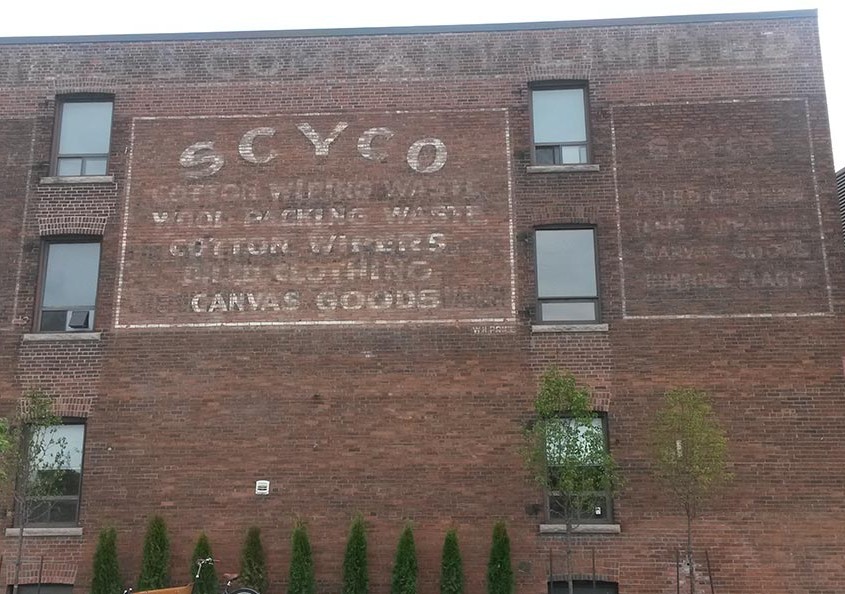 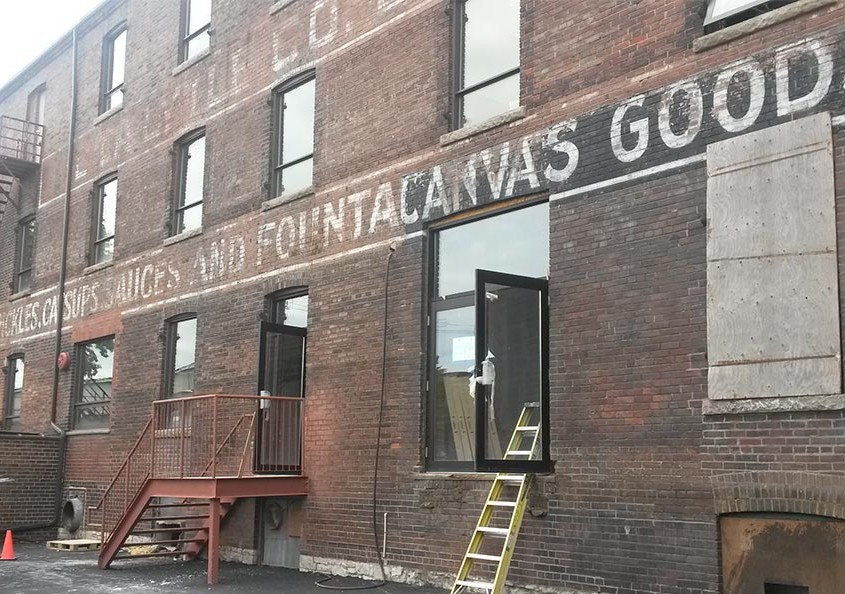 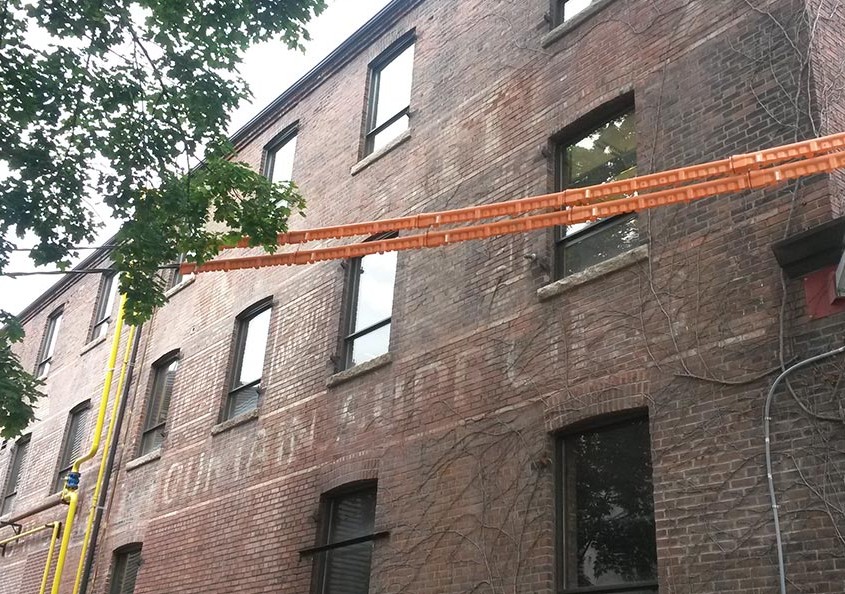 Warehouse space for loft and office use
128 Sterling Rd, Toronto ON  M6P 0A1

We were contacted by a construction company to bid on the restoration of some old signs/ghost signs that were painted about 30 -50 years ago and maybe even longer. The landlord was renovating and updating the space for a new life of rentals for warehouse and office space. It was the wish of the landlord to pay respect to the history of the building. Ghost signs have a unique history to buildings their preservation is a benefit to the whole community.

As we were painting the building we had a few people around and on social media asking what was going on. One particular blogger I stumbled across was One Gal’s Toronto – she is a great blogger for the history of Toronto, writing many excellent articles covering Toronto’s history and she just so happened to have a blog about 128 Sterling Rd.

We deduced that the building had 2 major contributors to the old painted sign. One was T.A. Lytle, this company bottled and made condiments as per their ads for “catsups”.

The other company appears to be “scythes” also known as “scyco”, they changed their name at one point. That company sold a wide variety of canvas goods from “cordage” “oiled canvas” and “tarpaulins”.

In reproducing the signs some sign areas were so worn out we had to make a tracing of other area and then reproduce the sign in the new areas. It was also an honor to repaint one of the signatures that were found “W.H. Price” – it was a different time when this artist painted the original signs, it was truly an honor to become part of this buildings lineage. While restoring the sign we had a lot of time to ponder the details of the original painting, questioning whether or not we could deduce by the way the letters were painted whether or not the original sign painter was in a hurry to finish certain areas. As a mural artist, this was quite an exciting project.

We used a Genie telescope boom lift on this job. The old signs were  lightly prepped before taping off the letters. We then proceeded to prime before top coating them 3 times – this is not a typical number of coats but it was completed in this manner as the intention is for these letters to be here another 100+ years. With the paint we chose to use Benjamin Moore AURA it has a lifetime guarantee – the original artists will have their work preserved for a long time to come.

This sign work has an awesome vantage paint from the train tracks and a frequently used jogging trail. This give this new and updated sign a chance to be seen by so many new people. The front area has a large field of view from the expansive parking lot.

128 Sterling Road is a street in Toronto, Canada. The street is famous in Canada because it was home for one of the oldest factories in Canada, the T. A Lytle Company Ltd. According to the description on some of their adverts, the company majored in the production of “pickles and catsups, sauces and fountain supplies.” The company was producing ketchup, jams, maple syrup and pickles. The founder of the company was Thomas Alexander Lytle, who was born in Northern Ireland. After his death, the company continued its operations but later stopped.

In its heydays, the T. A Lytle company was a beehive of activity. The company carried out its operations in a large factory, and it was one of the largest in Canada, back then. Due to the many products that Lytle produced, and the increased demand, he had to move to a larger factory, which he built at 128 Sterling Road. Before Lytle got into his business, many people used to do the pickling and caning in their homes. The company founder, however, saw a niche, and he utilized it well, opening a factory that took off the pickling and canning from the hands of individuals. He commercialized the business. The company stopped its operations a few years after T. A Lytle died in 1911.

The factory was later abandoned and left desolate. Today, however, the history of the building has been restored and celebrated. There are numerous Lytle brand ghost signs covering the building, embracing the rich history that the building stood for. One of the signs on the building reads “Fountacanvas.” This sign is mysterious, and it evokes further interest from people. Many of the ghost signs show the “Sterling” brand that Lytle used for his products. The signs have helped to tell the story of one of the most famous factories in Canada.

Scythes and Company Limited started its operations in 1910 in Canada. Initially, the company used to manufacture cloths and canvas. After the T. A Lytle company closed down, Scythes and Company Limited moved to the building that housed the factory on 128 Sterling Road. In 2001, the company rebranded as Flying Color International (FCI). FCI manufactures and distributes banners, custom graphic displays and flags. It is a big and reputable company that has respectable clients like the Canadian government, the Olympic Games, the United Nations and many other municipalities in Canada.

There are ghost signs that cover the old building that housed their operations. These ghost signs show the development of the Scythes and Company Limited over the years. The building has a rich heritage, and the ghost signs help to take visitors back to the years when technology was not as it is as today. The Scythes brand is prominently displayed all over the building, telling people a story that they never knew.