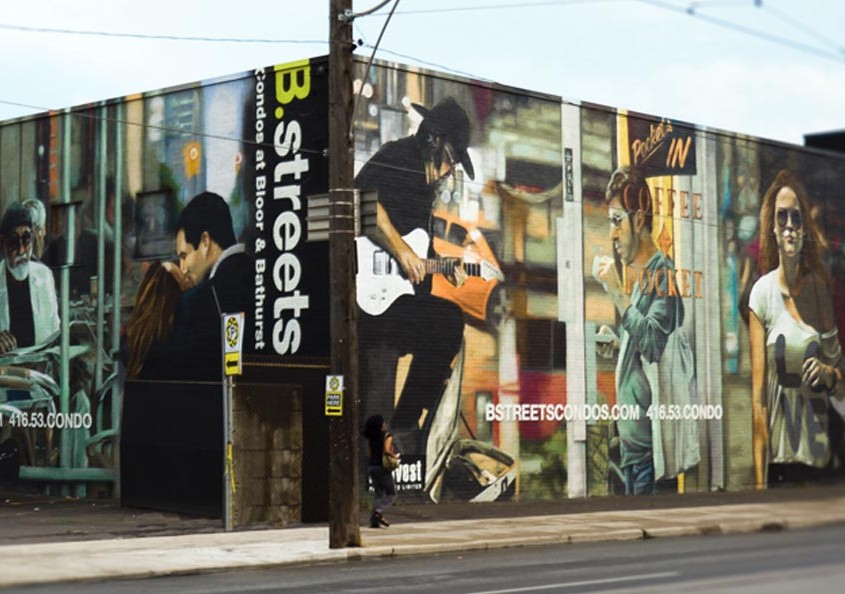 This mural was a promotional piece developed as part of a branding endeavour by L.A. Inc. for the B.streets condo development.

This was the site of a new building development. On the site before the development began there was a Catholic School. LA inc was the design agency that came up with the idea. The design team had an inspiration to do a mural on the old building, instead of bland commonplace vinyl ads, they opted for a large scale hand painted mural. This was a great idea and showed a real sense of originality on behalf of the design team. That was not the end of their concept for the mural. What LA inc did was also personalized the mural for the exact neighborhood. They went around the neighborhood and took pictures of some of the common people that hang out around the area. It was excellent, they had a coffee drinker at the local coffee shop around the corner, a jogger getting her morning exercise in and don’t forget the buskers. There was a total of 2 street performers, believe it or not sometimes when we were painting the buskers on the mural the actual real life person we were painting was also playing a few blocks away.

The mural area was first primed out white. This is helpful for the next step which was projecting. We used an LCD projector and a digital cartoon and or tracing of the image. The tracing was projected onto the wall at night and we traced out all the drawing, it was such a large job we almost didn’t get the tracing finished before the sun came up. A large portion of this mural was done by spray paint. Our team has a high proficiency in spray paint and some of us have been using spray paint since we were kids. To access the area we had a large rough terrain scissor lift. This machine gave us unrestricted access to the wall and a large area to have our paints and other materials.

This took us around 3 weeks to complete in that time we had some rainy days, despite the hold-ups we were able to meet the deadline for the unveiling of the mural.

Lindvest Properties are taking their final steps towards the launch of the B.streets Condos, located south of Bathurst and Bloor. The spectacular designs provided by David Pontarini and Hariri Pontarini make the most of outdoor living spaces with many terraces and balconies. The B.streets Condos were designed according to their surrounding environment, to mimic the variety of eclectic restaurant and shop-filled buildings in the area. B.streets is expected to influence and grow the street activities along Bathurst by attracting shops towards the east side of the property. Before, the east side of the street was a dull space, spiced up by a blank brick wall belonging to a former school.

The interior of B.streets condos will be as lively as the outside is expected to be, with warm and toned-down colors taking center stage in the color palette. Ensuring that the projects go as smoothly as possible will be Anna Simone, of the Ceconni Simone Interior Design Company. The social rooms within the B.streets building, including both the lobby and the party room, will portray the trendy, upbeat lifestyle for the enjoyment of the B.streets residents.

L.A Inc. is a sought-after branding and marketing communications agency. L.A Inc. focuses mainly on real estate and all the work that comes with it. L.A Inc. has, for over three decades, created a name for themselves and have set the bar high in regards to branding and marketing. They have succeeded in achieving this milestone by carrying out intense and informative campaigns and developing strong brand identities for its customers. L.A Inc. has a client base stretching all the way from Canada and the United States of America, to the entire world. For its efforts in ensuring appropriate and world-class branding for its clients, L.A Inc. has helped its customers sell over one hundred thousand units of goods. L.A Inc. has received recognition for its hard work and has won several awards.

L.A Inc. believes that great ideas only come about as a result of collaboration between the skilled and supportive teams every great organization has. Following this advice, L.A Inc. has won several awards, including the NAHB NATIONALS – GOLD for the B.streets – Signage that has marked their territory as Canada’s pre-eminent condo marketing company. L.A Inc. has been praised for their unique story-crafting ability as much as their client-focus approach to business. It does not take much to realize that L.A Inc. is the premier marketing and branding company in Canada.