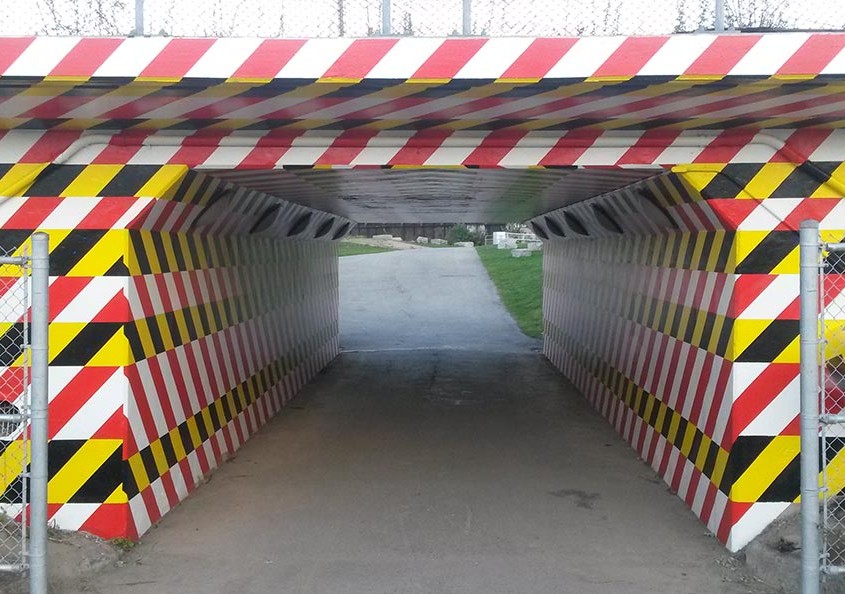 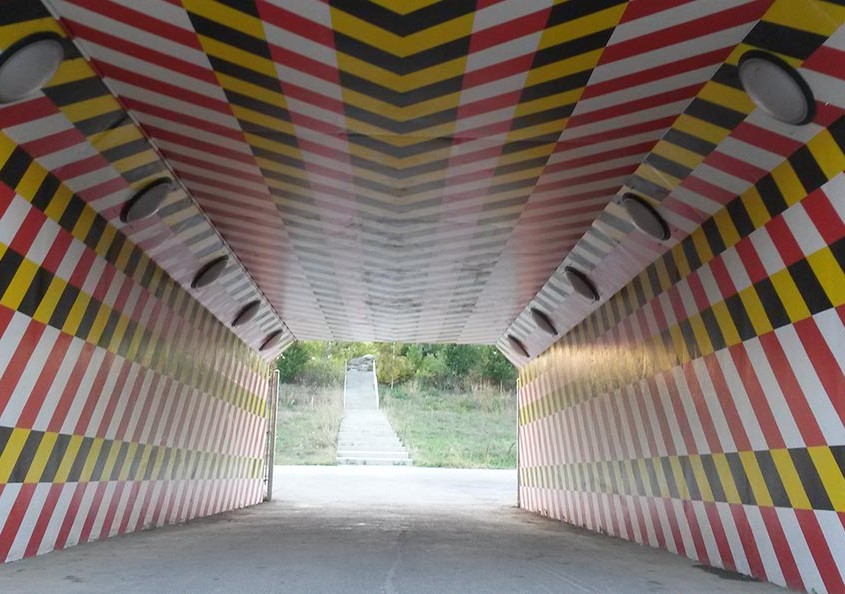 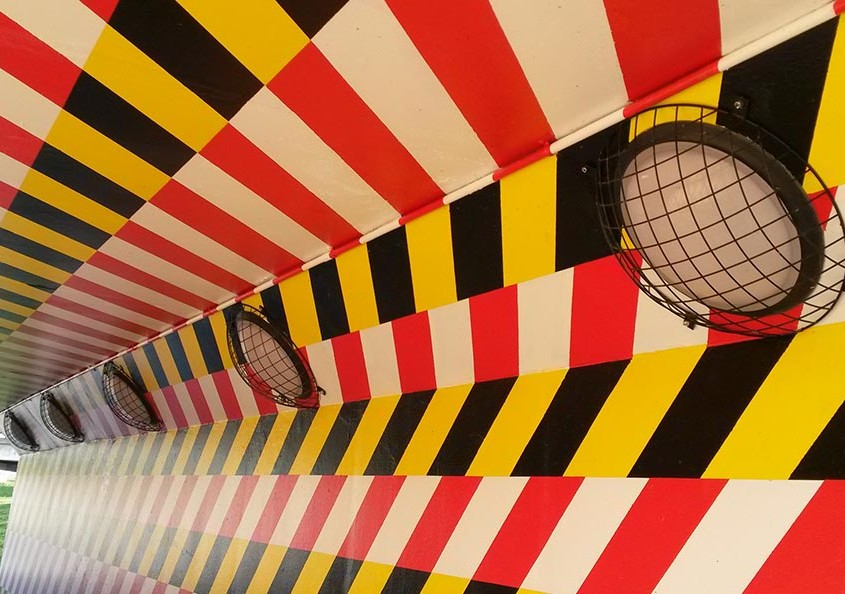 This project was a commission from Street art Toronto START. This Toronto funded art group specializes in creating unique street art for the city of Toronto. Rolande Souliere was the designer that won the design competition for this project. Rolande Souliere is a Toronto resident and currently resides in Australia. Her artistic style is very striking and attention-grabbing. For this underpass design, she did not cease to please. This mural is like none you have ever seen. The design is a colorful patterned design. It is very large chevrons that meet in the ceiling of the underpass, however, there are slight alterations to the pattern where the stripes don’t all meet up. The color is red, yellow, black and white positioned against each other to create an arresting design.

We took our time to plan out the way in which we were going to tackle the design. Our short list was stencil out the entire area, project the design or use a template. The stencil idea was a strong contender but in the end, we went with the template. Our thinking in the approach was that the chevron design is fundamentally based on a certain degree. We then made some templates of chevrons out of corrugated plastic.

At the site, we then painted vertical stripes of yellow and white. After the stripes, we then drew out the chevrons with our templates. Then we painted the alternate color for instance if it was white we then would paint red and on the yellow, we would then paint black. The reason we chose the initial colors first is that the first colors were very hard to go over the other color. An example is yellow would never go over black but black can go over yellow.

We had a large crew there around 5 people, we had to tape off all the lines to make sure they were razor sharp. The colors needed to be coated sometimes three times so tape is a better option than freehanding.

The underpass was not closed to the public while we were painting so we had to have caution tape at the entrance. However as detrimental to our safety as it was, some cyclists were determined to stop for nothing, and that means workers too. In the end, we had a very intricate entrance plan to foil even the most determined biker, it was a large zig-zag pattern that made the pedestrians and bikers have to slow down and take in their surroundings for safety.

It was rather a normal, plain and boring tunnel before its transformation in 2015 when a splash of color was added to bring life and beauty .With the use of red, black, white and yellow colors, streetARToronto (stART) with the help of artist Rolande Souliere had a vision. She used the colors to represent the four sacred directions of the Aboriginal Medicine Wheel. Across the tunnel run diagonal strips which elicit a wealth of memories of the movements that the first nations took on the many tracks of the Don Valley. Don Valley was hunting and fishing land over 12000 years ago, very important to the people at the time.

Bala underpass connects Corktown Common and the surrounding trail system. Corktown was previously an industrial wasteland, but that is no longer the case as it reinvented to become flood protection landform and park.

Rolande hopes that this project will give passers-by something to think about. To take them back hopefully allowing them to reflect upon the story behind this art. It will also arouse curiosity keeping them interested and make them come back over and over again maybe trying to understand the motivation behind its creation.

stART held a competition which sought an artist who could create an Aboriginal –inspired concept in their bid to revitalize Toronto’s cityscape, particularly for the Bala underpass. Rolande Souliere won. Born and raised in Toronto, she is an excellent artist with a lot of accolades to her name. Souliere attends exhibitions for art the world over such as a solo presentation at the Grunt Gallery, Vancouver, Canada. She also presented at the University of British Columbia, the University of New Castle and art space, University of Manibota e.t.c. She has an experience so untamed that many artists could only dream of having.

She got her training at the Sydney College of Arts, the University of Sydney by obtaining a BFA in 2000 where she was a director of the student’s gallery. She was also a member of ARTPORT a museum and galleries foundation.

She has received visual arts grants e.g. New Work Grant by the Canada Council. Rolande has been a tutor at institutions such as Sydney; College of Fine Arts, The National Art School and Sydney College of the Arts.

She is relentless about her love for art and continues to better herself by taking on a doctorate in Visual Arts. Her research will concentrate on indigenous art and its integration into modern art practice.

It was created in 2012 by the city of Toronto as a public realm to help develop and create awareness on how street art can be used to create a wealthy and exciting view of the cityscape. This project proactively eliminates graffiti vandalism by harnessing this talent so as to avert the adverse effects on the communities. The graffiti used is legal and used to enhance the surrounding environment instead of destroying it aesthetically. It helps people to treat public space as important.

This project gets its funding from stART’s Partnership Program. For large scale jobs, they give up to $50,000.