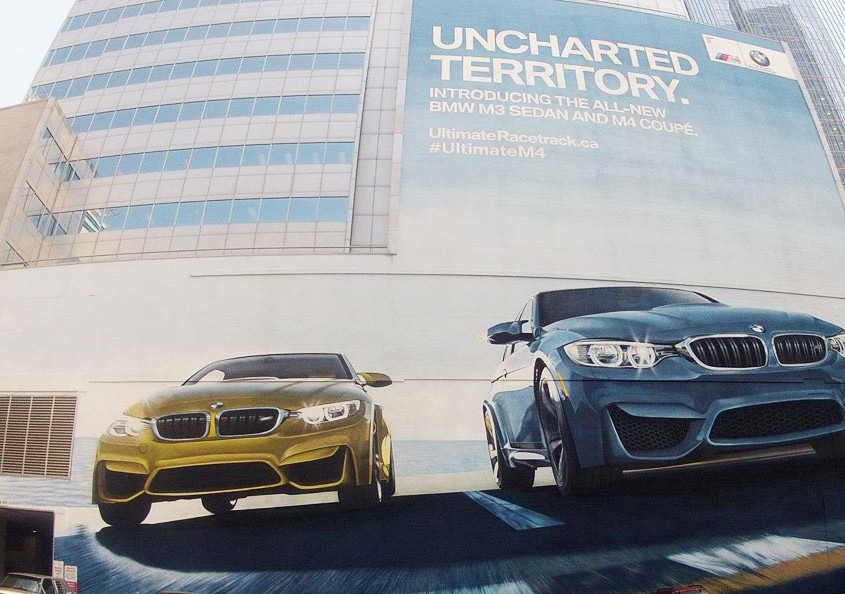 This large-scale exterior wall mural was painted in the spring to showcase BMW’s new M3 Sedan and M4 Coupe.

The wall is in a large parking lot. In order to paint this wall all the spots in front of the wall were rented to provide space for the scaffolding,  scissor lift, and telescopic boom lifts.

There is a large crew working on this type of wall. Many long days are also spent here, when there is a certain amount of time to complete the mural you can never be to sure about the weather and if it will cause you to lose days. So you can never rest, you must always be focused and working on the end result. Sometimes on large projects like this everything else is put on hold and the project is the only thing that occupies your time.

Before painting begins the main colours are picked. Generally, we get these mixed in bucket paint whether that be Behr or Benjamin Moore paint. They are all exterior grade and the top of the line. It is important to have the base colours already mixed so we don’t waste time trying to mix a colour that we know we will need a lot of.

Major areas of colour are taped and painted with rollers if the area is really big, or with brushes and mini rollers if the area is a little smaller and doesn’t justify the cleaning of the larger roller. Slowly smaller areas of color are painted. While the areas are being painted we can also blend in the colors. We do this with paint brushes. Ideally, you mix the paint wet on wet this will give you the best blend. On large areas to mix wet on wet can be very onerous. So the next best approaches are to dry brush the area, this name is self-explanatory you will have some paint on your brush but not a lot and then you blend the area with your dry paint and it gives you a blend. The last approach is a wash. This is almost the exact opposite of the dry brush because everything is wet, you have a mix of water and paint and then do a few semi-transparent washes of your area that you want blended. If the blend or gradation is not up to par we then use a HVLP and will tweak and or touch up what we did with our brushwork. We also use the HVLP to highlight and add depth with darks.

BMW is one of the most noticeable brands across the world. BMW is a manufacturer of luxury cars, engines, and motorcycles and it has its headquarters in Munich, Germany. The company has been among the top world leaders in auto sales and engine manufacturing. The story of BMW goes back to 1916 when it started its operations. Initially, the company used to manufacture aircraft, and it was then known as Rapp Motorenwerke. It was restructured after the World War I and began the production of motorcycles. The company had to follow the rules under the Versailles Armistice Treaty which did not allow the manufacture of aircraft. However, after the restrictions of the treaty were lifted, the company started the manufacture of automobiles.

A return to Aircraft Production

After the war, BMW’s automotive division had to look for ways to continue remaining afloat. In the late 1950’s, there was an economy car boom, and BMW decided to exploit this market too. The company bought rights to manufacture tiny Italian cars called Iso Isetta. The moderate success of these vehicles helped to prop up the company.

Overtime, BMW grew to become a giant in the automotive industry. Their car and engine designs have helped to push up sales across the world. BMW has four main divisions that handle different products. BMW Motorrad produces motorcycles, BMW Motorsport produces motorcars, BMW Mini produces small vehicles while BMW i produces electric vehicles. Each of these divisions handles distinct products designed for pecific segments of the market.

BMW continues to lead in many fronts with the range of motor vehicles that it manufactures. The company manufactures cars that fit the needs of different clients. Some of the vehicle models are sedans, hatchbacks, convertibles, SUVs and station wagons. BMW manufactures some of their cars under a series. For example, there is a 1-7 series range of cars that have different specifications tailored for different markets. Lately, BMW has been producing electric cars, and these include the BMW i8 and i3 models.

The year 2012 saw BMW voted as the number one most reputable brand in the world by Forbes.com.