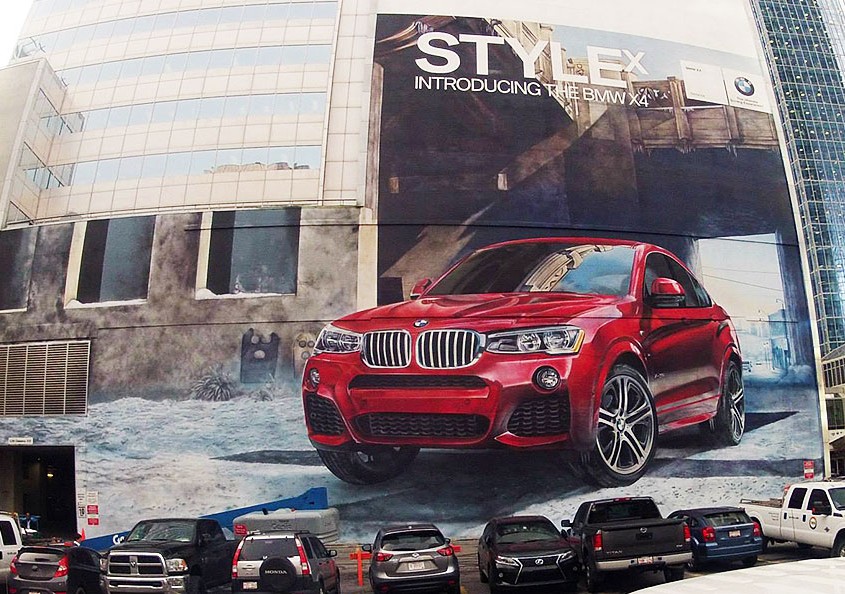 Our artists are skilled at painting large exterior murals. To paint this particular mural, we projected the image onto the wall before painting it in a number of large sections. Due to large size of this wall, the projector had to be 50 to 60 feet away from the wall. This meant that the projection would not be able to cover the entire wall at one time. There were at times 8-10 people working on the site. Working at night is required for projection work, in order for us to see it clearly. Starting from sundown each workday, we worked well into the early morning hours.

Before beginning the mural projection, we create an outline of the mural design in our studio. We trace out the main areas and all the fine details. We capture each tiny detail; it is of vital importance to have as much detail as you can when doing a mural. The result is a black and white outlined image. This image is then printed; we keep it on hand when we are tracing the projection. If we were to project the color image, it is very difficult for us to see. The black & white image makes it much easier.

After the projection work is completed, we outline the work with painters tape. This will keep the large shapes and the colours separate. To fill in the areas we use either a roller, mini roller or a brush. Which tool we use is dependent on the size of the area that requires painting. Once the main areas have a base coat of color we then move on to the secondary stage where we develop the form more through shading and blending. For the third stage, we work on the highlights and shadows. An HVLP spray gun or paintbrush allows us to complete this part of the project.

In order to paint the top of the building, a painter will repel down from the top in order to paint this area and to paint the letters and signage of the mural. A repeller is someone who is tied off to a rope and safety gear, who then dangles over the side of the wall just with a rope and harness. For the lettering and typefaces, we used a pounce pattern. The pounce for the type was done on a boom lift; we could only have the boom lift there for a short amount of time which necessitated a repeller for the remainder of the project. We also put to use two scissor lifts and a large boom lift to access the really high areas.

They say that German technology never fails. The BMW X4 is indeed testament to this assertion. This car is a complete masterpiece, and it is ideal for anyone who desires to have a car that handles all terrain well. The X4 is a smaller version of the X6, but the X4 actually mirrors the X3. The BMW X4 was designed to become a coupe version of the X3 which is an SUV. When you look at it for the first time, you might mistake it for the larger X6. The manufacturer designed it to look almost like the bigger X6, although it lacks in some features that are present on the larger SUV.

For people who love SUVs, there is always a reason for the choice. Maybe it could be the high clearance or even the off-road handling capacity. If you are a lover of such vehicles, you may need to try the X4. This car is not exactly an SUV, but effortlessly fuses SUV features with the coupe features, and the result is a car that makes you stand out from the rest of the pack. Even though some real SUV enthusiasts will argue that the X4 is not a real SUV, the X4 has done enough to earn a place among the big brothers.

The X4 comes as a four-door compact luxury SUV that has a roofline design that looks like a coupe. It is a five-passenger car which has two main engine choices; xDrive28i and M40i. All X4s come fitted with 18-inch alloy rims, heated leather seats, parking sensors, satellite navigation and automatic air conditioning. If you choose the xDrive28i, you will enjoy all the standard features of the X4 plus other additional features. These include LED running lights and fog lights, dual-zone automatic climate control, sunroof, and power-folding mirrors. Some of the feature packages available on the xDrive28i include leather upholstery, keyless entry and ignition, and satellite radio. The M40i is ultimately more powerful and has better performance enhancers. This engine choice is for those who desire to have more top speed and better interior enhancements.

All X4 cars come with packages that help the driver under different circumstances. There is a Cold Weather package that features heated front and rear seats, as well as the steering wheel and retractable headlight washers. The Driver Assistance package employs the use of top technological features that help the driver in the event of an accident.

The X4 engine is diesel-powered. BMW offers the X4 as six-cylinder and four-cylinder units. The standard on all X4s is an eight-speed automatic transmission, but the 2.0-liter engine will have a six-speed manual gearbox.