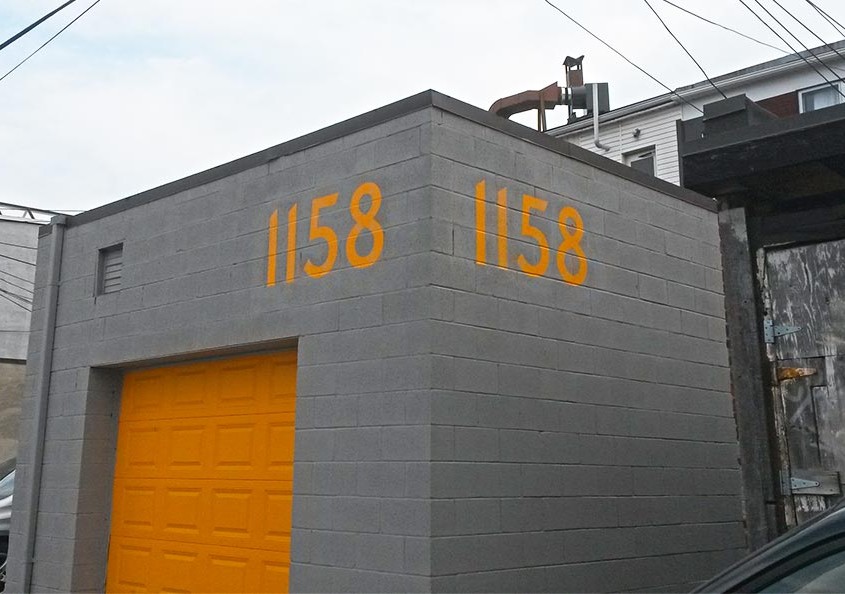 The owner of the business wanted their sign painted on their back alley entrance. The back alley was tight and the customers coming to the studio would have trouble finding the place. So he decided to paint the numbers of their address in a large font.  The font he chose was aligned with the fonts that he uses with his branding. We also painted the door to his studio.

This simple font was an excellent choice for a vinyl stencil. We used mac tac regular vinyl to create the stencil. This type of vinyl has more stick to it then the artistic stencil vinyl that we sometimes use, the extra bonding ability of this vinyl give us the assurance it will adhere to the wall for the duration of the time we need to complete the painted sign.

For the smaller address on their front door, we used a brush and gently brushed in the paint.

When you come to this studio now it’s hard to miss the elegantly painted numbers and you have no trouble finding the studio.

Sandy Nichols started telling stories using photography in 1990. With a team that is talented and qualified, Sandy tells stories through still and motion pictures. The team works on large-scale projects, both commercial and personal projects.

In the 90’s, Sandy made photo essays for Vogue, the rolling stone and Australian magazine after which he delved into making images for advertising agencies and designers. Over the years, the team has gained experience and works on projects from the inventive step till production.

His professionalism and elegant style have earned him clients such as Air Canada, Glaxo Smith Kline, and Nickelodeon among many other reputable companies. His photography has taken him to the biggest exhibitions in the world like the world expo, national portrait gallery and the museum of contemporary art in Sydney.

Sandy has had solo exhibitions in Canada, Australia, and the UK. He has bagged many notable awards for his great work of art in photography.

Brockton Village is the place of residence for Sandy Nichols work of art. The town comprises of the old city of Brockton which is a village. To the south of College Street in Brockton Village is an influx of Portuguese immigrants which has seen to the sections naming; Little Portugal

The town runs from north of the rails between Dufferin and the South Lansdowne. The area began when the cousin to Sir Isaac Brock garnered 100 acres of land. When He died, his wife Lucy sold the pieces of land that he owned and commissioned a roadway. In 1850, the road construction ended, and the road is today known as Brock Avenue.

In 1881, the area became a town and development started. After a short three years, the town then incorporated into the city of Toronto. There are remnants of the old town however like the town hall.

History of Photography and Motion

The discovery that some things are visible when exposed to light and the darkroom principle forms the basis for the evolution of photography. Though these facts were known, no one put them together until 1800 when Thomas Edgewood made the first attempt which was unsuccessful.

After his trial, others followed and began to try, in the late 1820’s, Nicephore Niepce succeeded. The results were crude, but this pushed them to develop the daguerreotype process. The process officially commercialized in 1839 and catapulted photography to a new level.

The process then gave way to the calotype negative and salt print invented by William Talbot. The inventions and reduction of the time the camera stays exposed to light reduced significantly and pictures in natural color and black and white. It was not until early 1990 when digital cameras came about that photography revolutionized in an instant.