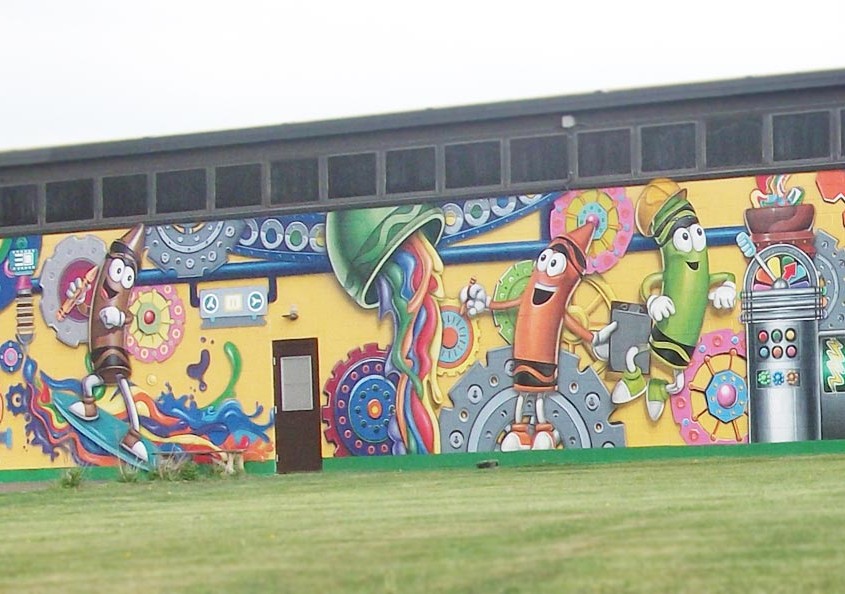 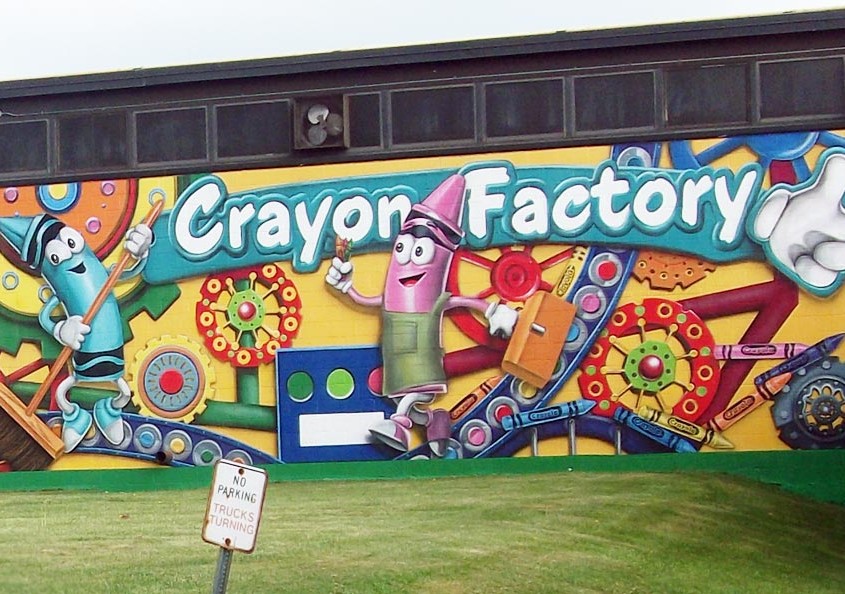 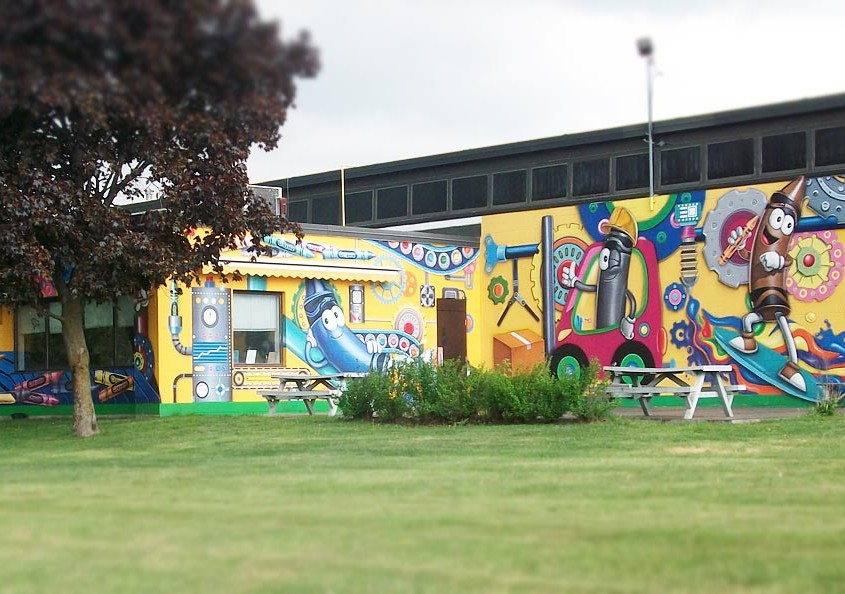 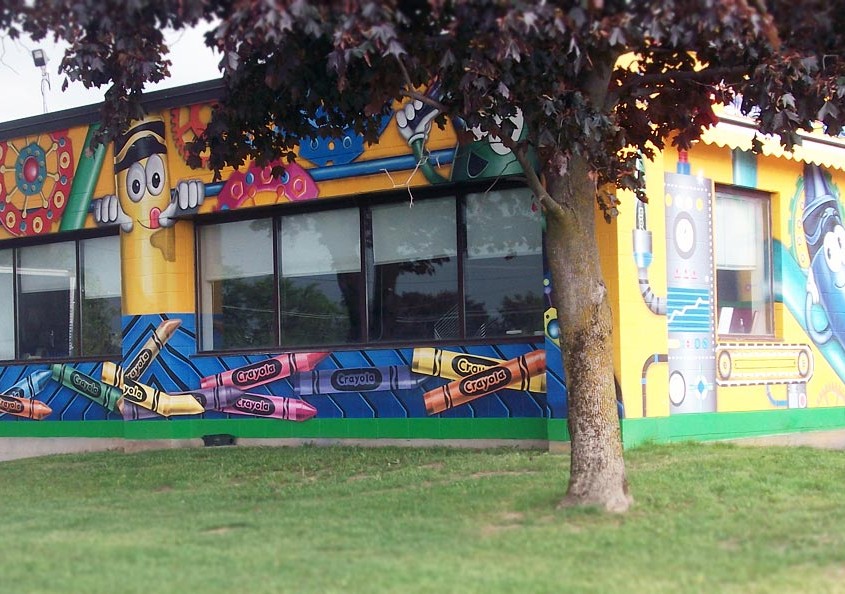 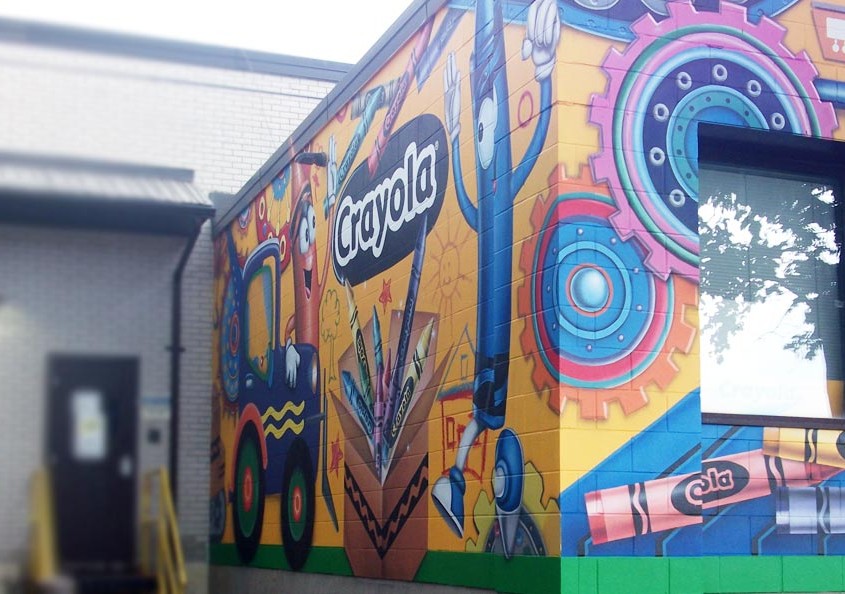 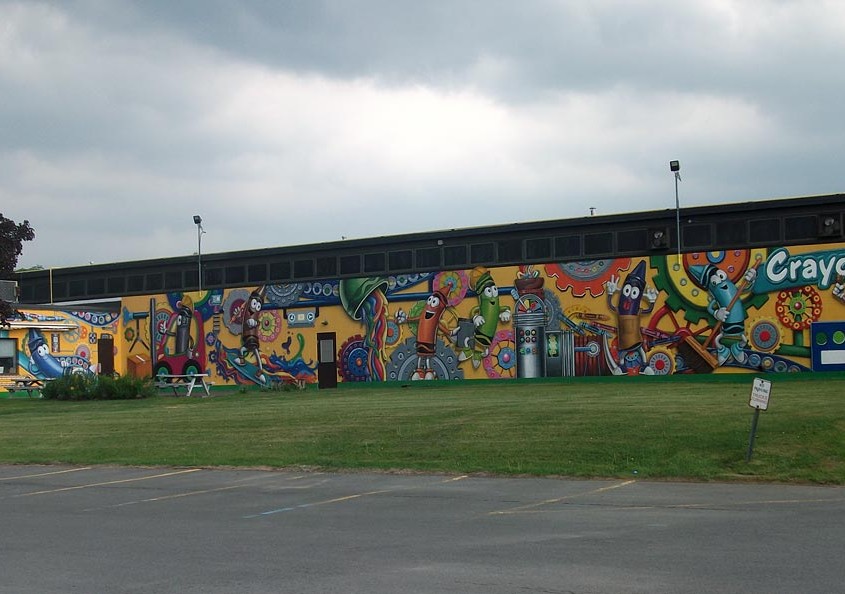 This large 200 foot mural was painted on the side of the Crayola Crayon Factory located in Lindsay, Ontario.
Distribution service in Ontario, Canada (warehouse, not a public facility)
15 Mary St W, Lindsay, ON

This warehouse distribution centre for Crayola had a huge canvas for a large mural. Concrete block for as far as the eye can see. It would only be a matter of time with a company like that, their main product is colour and creativity before they would decide to paint a wildly colourful and fun mural on their warehouse walls. This will let the town of Lindsay know who is here in the town.

The full blast up to the max colourful design for this mural was a feat in itself. It was very creative borrowing off of the Crayola marketing brand already well established. There were crayons doing all sorts of things, from surfing on a wave of colour to delivering boxes of crayons for their next shipment.

The design was projected onto the wall using an overhead projector. The design was drawn out on an acetate sheet before being laid on the projected, this is how the image appears on the wall. We traced out the mural with construction pencils. At night, up in this sleepy little country town (we hail from Toronto, remember), the mosquitoes were out to greet us and keep us company while we worked into the wee hours of the night tracing out the drawing.

For the next few weeks, a large crew painted the mural. First, base layers were painted in by brush and roller. Next, secondary areas were painted and blended with brush. Finally, at the very end an HVLP sprayer was used to add highlights and deeper dark areas to make the mural really pop.

Very proud to have been apart of this project, it’s a fabulous addition to the Crayola warehouse and really brightens up the small town of Lindsay.

Formerly known as Binney and Smith Company, Crayola is a leading company that deals in the manufacture of artist’s supplies. Having 11 different locations with its headquarters in Forks Township, Pennsylvania, United States, Crayola has an admirable reputation in the handicraft industry.

On March 31st of 1885, two cousins, Edwin Binney and C.Harold Smith founded this company as Binney and Smith city. The initial products from the company were colorants for industrial use. These included red iron oxide pigments used in barn paint and carbon black chemicals used in blackening tires and prolonging their durability as well as improving usefulness. The company’s new process of manufacturing less costly black colorants saw them competing at the 1900 Paris Exposition indicating serious growth potential. In the same year, 1900, the company added production of slate school pencils to its list. Just four years later, Binney and Smith invented the first dustless white chalk. This magnificent progress won them Gold in the 1904 St. Louis World’s Fair. Crayola had now become a formidable player in the industry. Using the gold award of 1904, Crayola’s growth knew no bounds. In 1926, Binney and Smith purchased the Munsell Color Company crayon product line, and in so doing they inherited 22 new colors. Combining its existing crayon colors with the Munsell colors, Crayola introduced its largest color assortment product to date in 1939. Binney and Smith were changed to Crayola LLC in 1st of January 2007 to improve its branding. More products have been introduced ever since, such as My First Crayola whose products include triangular crayons and flat-tipped markers launched in 2011. In 2015, ‘Color Escapes’ for adults was introduced to help grownups relieve stress.

Crayola crayon packs are sold to various establishments such as hotels, schools, and restaurants to be handed out to children or any other interested people. The packs come in different package counts ranging from two to 200. Common retail packages are in multiples of eight with 8, 16, 24, 48, 64, 96 and 120 packs being marketed by Crayola. Big packs, such as the 150 crayon pack feature other added products such as an inbuilt sharpener. It includes 118 regular crayon colors, 16 glitter crayons and 16 “metallic FX” crayons.

As Crayola grew, so did the number of Crayola colors as well as their varieties. By 1998, there were120 Crayola colors and now the total is 170 regular colors produced.  120 standard crayon colors are currently produced by Crayola. This color scope gives them a favor and more likeability in the market.