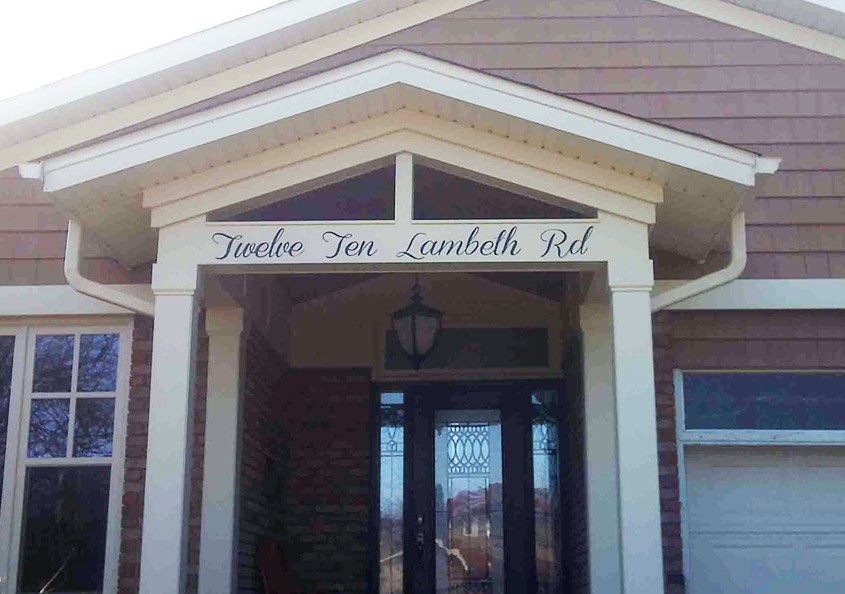 We were contacted by this homeowner interested in having her address painted on the front entrance of her home. It’s common for homeowners wanting to add a unique and personal touch to their home to have their address hand-painted.

The client wasn’t sure about exactly what type of font she wanted to be painted. We worked through this with the client, gathering a variety of fonts in the style that she described. We slowly narrowed the selection down, providing an example of how the finished product would look using photoshop in the specific fonts that she wanted to see on the front entrance of her home with a picture of the front house. This way she could have a better idea of which one would be the final choice. You get a really good idea of how it will look when it is photoshopped in.

Her house is right on a corner, you get a great view of the painted address. When turning into the street. The font chosen was very elegant, and feels right with the architecture of the house.

An A-frame ladder was all that was needed to access the front area to paint the address. It was done in the daytime and in time for the homeowner to come home to a finished painted address.

Brampton is a lively city of the Peel region, located in the province of Ontario in Canada. Brampton has an average population of over half a million, according to the latest Canada census carried out in the year 2016. One of the star points gracing the city of Brampton is that it is the third most populous city behind Toronto and Mississauga and the ninth most populous municipality in Canada too.

In the early 19th Century, Brampton was known as The Flower Town of Canada, thanks to the many greenhouses that dotted the landscape then. Later, in 1853, the town got its current name, Brampton, after a market town in England. Today, Brampton is known for its prowess in manufacturing, administration, and logistics, top-notch information and communication technologies as well as business services.

All who live in towns and suburban neighborhoods are conversant with the term house numbering. It is a form of addressing, where each building, street or area is given a unique number for distinguishing purposes. House numbering makes it easier to locate a particular building. The art of house numbering began in the early 16th Century in Pont Notre-Dame in Paris, as a means of accurately distributing property ownership in the region. Later in the 18th Century, street numbering was applied across Europe and Russia. The need for postal services as well as other administrative activities fuelled the adaptation of house numbering.

In Japan and South Korea, each city is subdivided into smaller zones for means of addressing. In each zone, every house is numbered clockwise, in the order in which they were constructed. This system of addressing is similar to the one used in Venice. Further away in Hong Kong, the British method of numbering is adapted. This is where, on the street, the houses on one side are numbered in even numbers, while the houses on the opposite side of the street are numbered in even numbers.

In Finland, a much-updated system of addressing is incorporated. Due to rapid urbanization, construction of buildings has increased tenfold. The addressing scheme is always Street Name, followed by the Street address number. Each new building gets a new address by adding letters that represent the new ground level access point within the old street address. This comes in handy in apartment buildings.

Across the world, house numbering has been a method used by countries to bring order and consistency in various administrative activities, as well as commercial delivery processes. Residential address painting should, therefore, be a must-do in any new suburban home or downtown buildings. Make sure to have a visually appealing, as well as legible house address for your peace of mind.