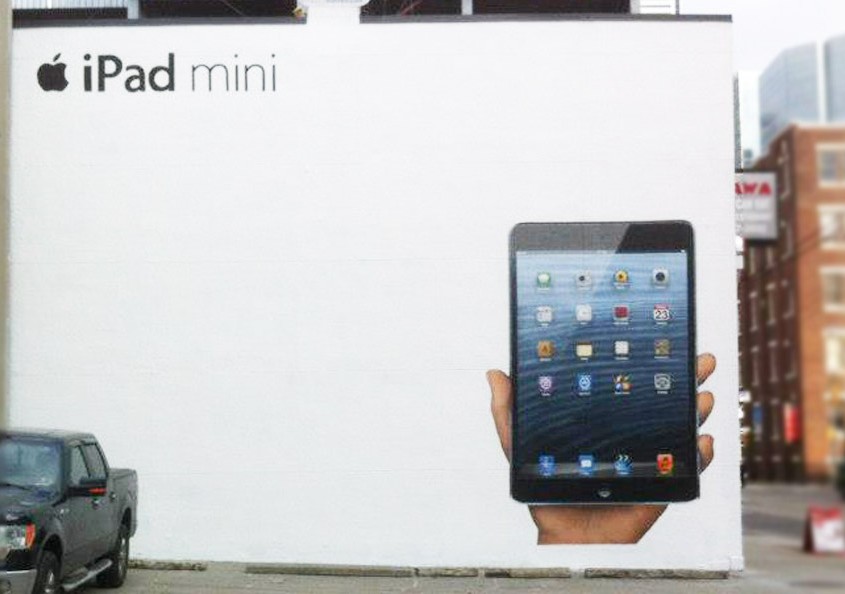 This mural showcases Apple’s iPad mini in a minimalist and eye-catching manner. Featured on a wall in downtown Toronto on Adelaide Street.
254 Adelaide Street West, Toronto, ON

Even though the space we had to paint was small it was no easy task. There are many layers to painting something like this. First, there is the background of the home screen, then the icon in which the icons have many layers all unto themselves. Lastly, there is the case of the iPad and then the cherry on top the shine that ever so gently cuts the image and creates a three dimension.

The main shape of the phone, ripples of water in the home screen and the hand holding the iPad were traced out by a digital projection. This was done at night, there are projectors that can be used in the day but they are very expensive and aren’t necessary for this type of project.

After we have the outline sometimes called the cartoon we then can start to paint, it can be tricky to paint certain areas because if you paint over your outlines then you lose your object. So you have to ever so slightly paint around the lines and then eventually after you have enough information you can paint over the whole area with the right colors.

For the icons, we used a vinyl stencil. Before we had the icon stencils cut we measure the size that the icons need to be, then in the illustrator program we make the size of the icon to match.

Even though the phone was limited to one small area we still had to paint out the rest of the wall because there was a mural there before. For this, we used an airless sprayer to paint out the area. This allows us to paint large areas fast.

The mini version of an iPad is every inch an iPad as any other in the market; it is just set apart by its small size, sleek design, and lightweight features. The performance of the mini iPad compares favorably to other devices. Many people who value portability and have been put off by the size and weight of regular iPads find this device glorious. It is a comfortable fit in one hand and is even becoming a replacement for mobile phones by some.

When you first see it, you might belittle its capabilities, but it applies the principle of small but mighty. Using this device gives you a new look at technology and the heights that you can reach. The features, storage, processor speed, camera and even music capabilities are astonishing. You can grow your creative ideas even more in a sleek, light, thin and powerful next generation device.

If you are skeptical about it and don’t want to give up your iPad for this mini version, consider this, it’s like a transfer of everything you have going with the current device into a much better-looking device that is way smaller and more attractive.

Smaller does not mean slower when it comes to the mini iPad. It is stronger than some existing computers. It has an A8 chip and 64-bit build that gets your apps running at unbelievable speeds and accuracy. You can face-time, work anywhere and even create and edit videos instantly.

The two cameras are probably one of the reasons why the iPad mini is not only dominating the iPad market but also the mobile phone market. With two incredible cameras with amazing capabilities and features beyond your imagination, this device is nothing short of amazing.

iPad mini walks you into a world of world-class security systems where no one can just crack open your passwords. You can use fingerprint sensors, facial recognition and even airtight pins and passwords that no one can bypass. It is all made possible by the technology employed in building this device. Through these security protocols, all your activities have protection including browsing, uploads, and downloads.

iPad mini has a retina display that allows for a variety of applications. You are the only one who can limit yourself and your reach because this device knows no bounds. Before even purchasing apps from the Apple store, there are many amazing inbuilt apps that you can explore on the iPad.

In the financial district of Toronto, there is a painting that depicts the iPad mini in a smooth and attractive light which makes it a very eye catching device. The mural aims to showcase the new age of Apple iPads which is the iPad mini that is not limited by size but even outperforms other devices in the market.

The painting shows how easy to handle it is; it can be held with one hand and has a variety of apps that you can delve into immediately after making a purchase. Believe that the only mini thing about this device is the size, everything else is mighty.