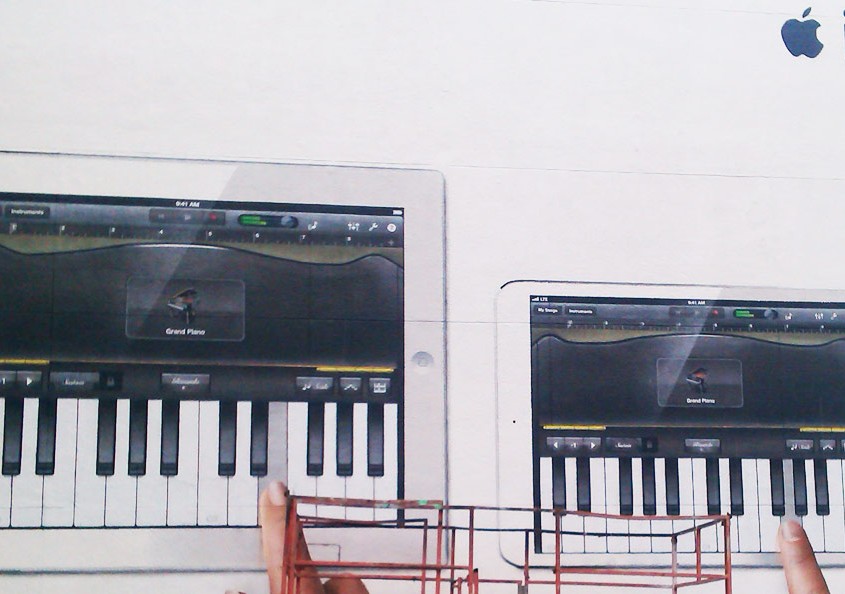 This campaign was to introduce that you can play music on your iPad. There is an iPad and an iPad mini. They are both positioned side by side. Each having the same program/app displayed on the screen, the program being a piano app that creates the sound of piano.

This particular image was very interesting and challenging. The reason being is it has two of the same images except one was smaller. It difficult to paint the same image side by side. The eye has an uncanny ability to see tiny variations. On the plus side the images weren’t extremely detailed or hard to paint. Laying out the mural we projected the image. We will sometime use a construction pencil or spray paint to lay out the initial drawing. For straight line we will use a chalk line, all vertical and horizontal lines will be made with a level to assure it is not crooked.

We employed the use of levels a lot on this particular project. The piano keys are all level and many other line are all straight. There are tiny little pianos in the middle of each screen those were very fun painting we used just about everything to paint those, from stencils to brush to spray paint and even paint markers there was a lot of detail in that very little area.

ABOUT THE IPAD PIANO MURAL

Music is an integral part of everyday human life. It is therapy to many and impacts each person differently. There are those who much prefer making their music, listening to different genres of music and those who love playing instruments. Everyone’s needs and preferences, taken into account by the iPad which is not only a smart device but is also an incredible musical device.

These features of an iPad are unknown to many owners who may have never given much thought to this features, but they do exist, and you should explore them. Even if you do not have intent on making music, you could inform someone who did not know about it and set them on the right music production path.

The capabilities of the iPads musical features do not stop at playing instruments but extend to composition, production and even performance. Who knew that you were carrying around a full recording and production studio in one device?

Here are some of the reasons why iPads are taking music production to the next level.

You can make music on the go

Normally, making music on a computer is quite exhausting because their portability is not ideal. With an iPad, you can easily carry it around, stop and make music whenever an idea strikes. Instead of sitting on your desktop and waiting to get ideas, travel to inspirational places and take your best help, the iPad, with you as it is here to enhance and facilitate your creativity.

Instruments are expensive, that said, you can get to learn and play them for free with an iPad. Experimenting with many different instruments is the best way to find which one speaks to you and which one you are great at. There are musical instruments that you did not dream of ever getting to play, that’s just how amazing the iPad is.

Making music has never been easier, and each time you make a new composition, you realize that you get better with time and also get to work with all the instruments and synthesizers that a desktop or studio would provide. The only thing that has changed is that the iPad is very portable and sleek.

iPad piano is a mural in Toronto that aims at showcasing the vast extent of the iPads capabilities. It is a device that knows no bounds and ventures into many different fields and excels. The mural shows a continuation of Apple dedication to promoting creativity. It goes to show that the iPad is not just a device, but it is a valuable learning tool.

The painting has piano illustrations on two sizes of the device. It shows that whether it is a larger or smaller iPad, they are created with ample screen display to allow for users to comfortably play the instruments and see their compositions and production tools clearly. There is an iOS music industry that has taken shape and grown due to the iPad.

Explore the vast horizons set by Apple for creative minds, the ease with each you can use and master the device and a myriad of different apps all for your growth and betterment.