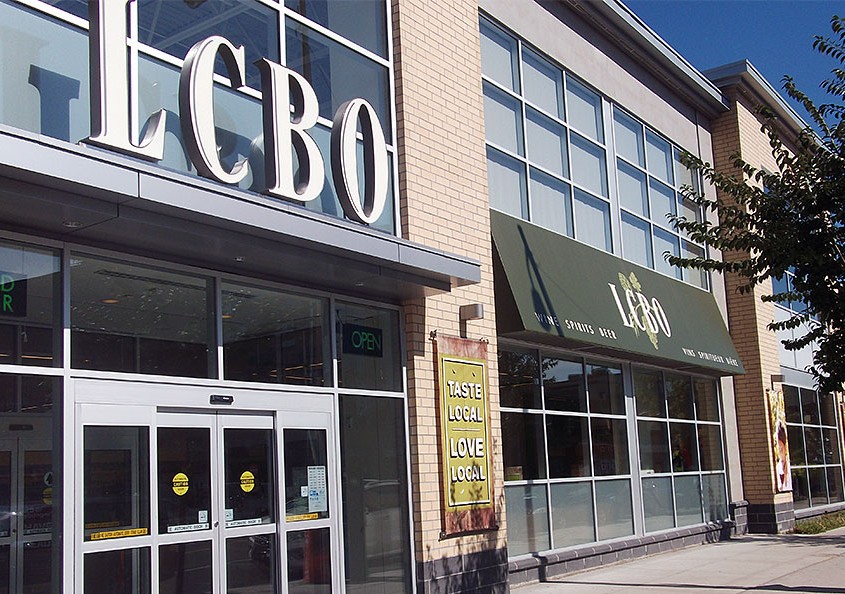 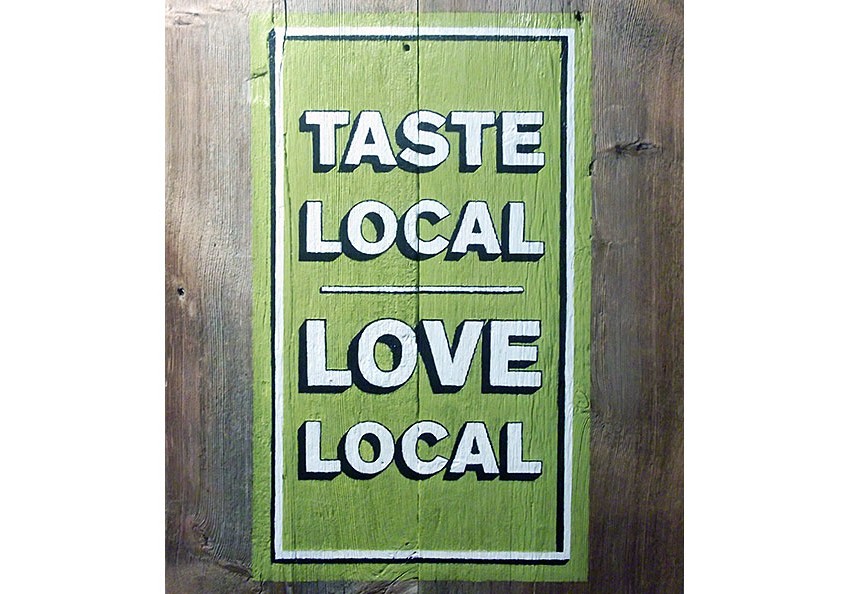 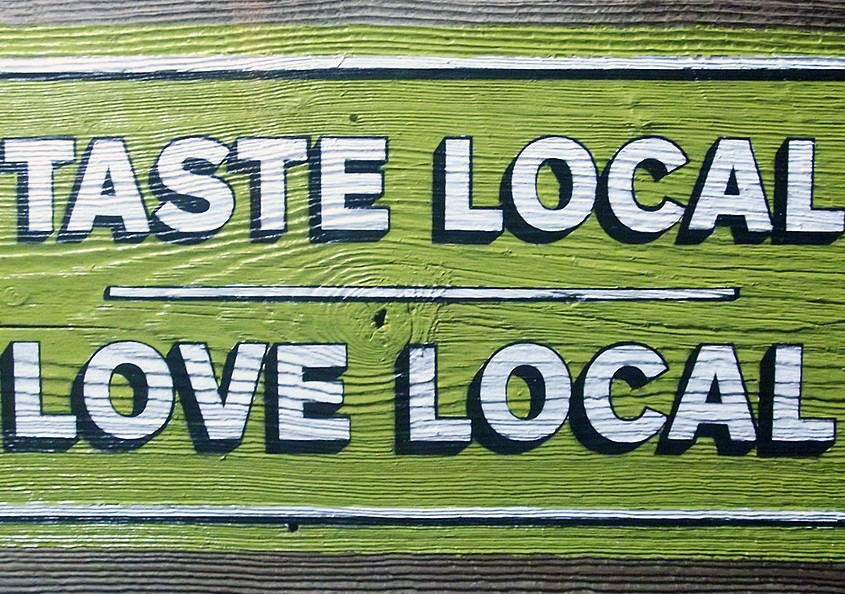 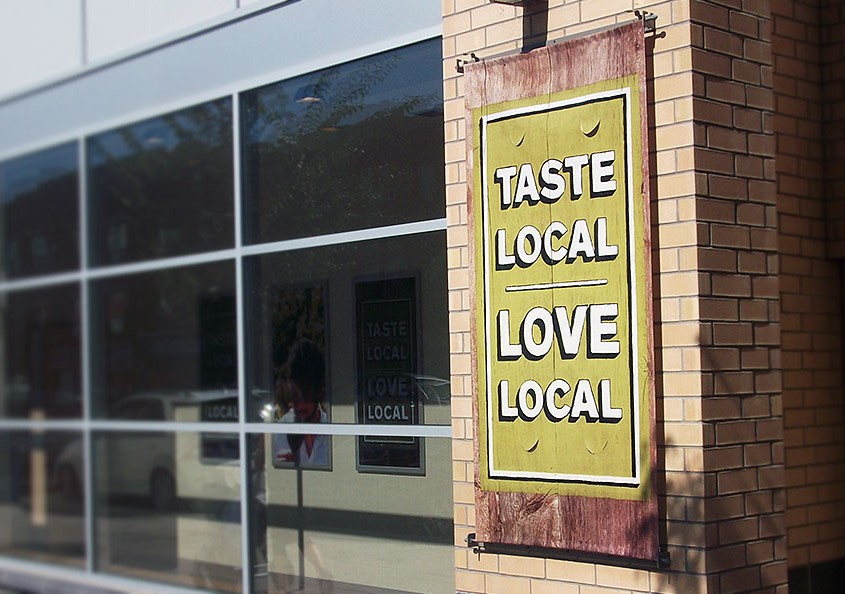 Hand-painted on wood boards, mounted in select LCBO locations, additionally printed on banners to be showcased in a large number of LCBO locations.
LCBO (Liquor Control Board of Ontario)

A design team of the LCBO was promoting a local brand movement. Their goal was to encourage that people buy in their region and the local area, in this case, it would be alcohol, beer, and wine.
They couldn’t get all the signs hand painted so they did the next best thing. Had us paint two small hand-painted signs. Then the signs were then photographed and then produced into vinyl signs for the campaign.

For the wood, we sourced it from a local warehouse that specializes in reclaimed wood. This gave the wood the extra natural look needed to emphasize and align with the campaign.The warehouse for the wood was in the west end of Toronto, on Dufferin St near Queen St. They have rows and row of reclaimed wood from all over. We went there with the client and picked out the right piece of wood, in selecting the right piece of wood we needed to be aware of texture, the grain, and knots in the wood.

Back at the studio, the pieces of wood, now cut to size, were painted. We painted a base coat before laying out the stencil to paint the letters, we then meticulously painted the outline and 3-D effect of the letters.

The LCBO had these banners up in many stores all across Ontario, a store close to our studio had them displayed as the main advertisement outside and it was rewarding seeing them up in so many LCBO locations as their main advertisement and also smaller ads.

Liquor Control Board of Ontario commonly known as LCBO is a Crown Corporation that deals in retailing and distributing beverages to all of Ontario province, Canada. LCBO has 651 stores with approximately 3680 employees who work full-time.

Created in 1927 by the Liquor Control Act of 1927, LCBO has the sole responsibility of controlling the sale of, transportation and delivery of alcoholic beverages in Ontario Canada. This is after the lift of prohibition of such activities since 1916. After the re-election of a Conservative government led by Howard Ferguson in the 1926 provincial election, the Liquor Control Act was introduced to allow people to enjoy a freedom under certainly reasonable restraints. The purpose of LCBO, as Ferguson put it was to promote temperance sobriety. LCBO formed an oversight that investigated or was required to know who was buying and how much and what nature was made of it. As such, drinkers required to have licenses. These permits, initially passport sized books evolved with time to permit cards in 1957. LCBO continued to closely monitor the consumption of alcohol by license holders ensuring no one exploited the privilege. With time, more legislations were passed to allow the sale of alcohol in restaurants and hotels. However, all these new policies were to be governed by LCBO. Eventually, liquor stores were established in Ontario, all these retails having the LCBO logo.

Backing up its reason for formation, LCBO pricing policies are geared to control alcohol consumption in Ontario as well as generating revenue for the federal and provincial governments. The pricing policies also aim to support the domestic alcohol beverage industry. This is achieved through a provision of incentives to purchase Ontario wine. All liquor prices are uniform throughout Ontario despite unavoidable differential costs incurred either through transportation or distribution. LCBO sets minimum selling prices to discourage excessive consumption of alcohol. Also, LCBO sells less-intoxicating brews such as light wines at reduced prices. This helps in controlling consumption patterns which are part of their core social responsibility.

An LCBO agency is an authorized retail store of LCBO Ontario. There are approximately 654 stores in the province. These stores accept Apple Pay that allows contactless payment for all purchases of liquor. Aside from these stores, LCBO has authorized some supermarkets to sell cider, wine, and beer within their grocery aisles. Also, almost 130 grocery stores have been permitted to also sell these products.

Encouraging environmental conservation, LCBO has rolled out plastic shopping bags. Customers are encouraged to promote and contribute to this initiative through, bringing their reusable bags or requesting or buying their handle-less LCBO paper bags. Cardboard carrying bags have also been introduced.  Also, LCBO has been at the forefront in the preservation of Lake Ontario. Through its National Heritage Fund, LCBO and its suppliers have been able to raise about $2 million for projects aimed at rehabilitating Ontario wildlife habitat including the Bring Back the Salmon project.