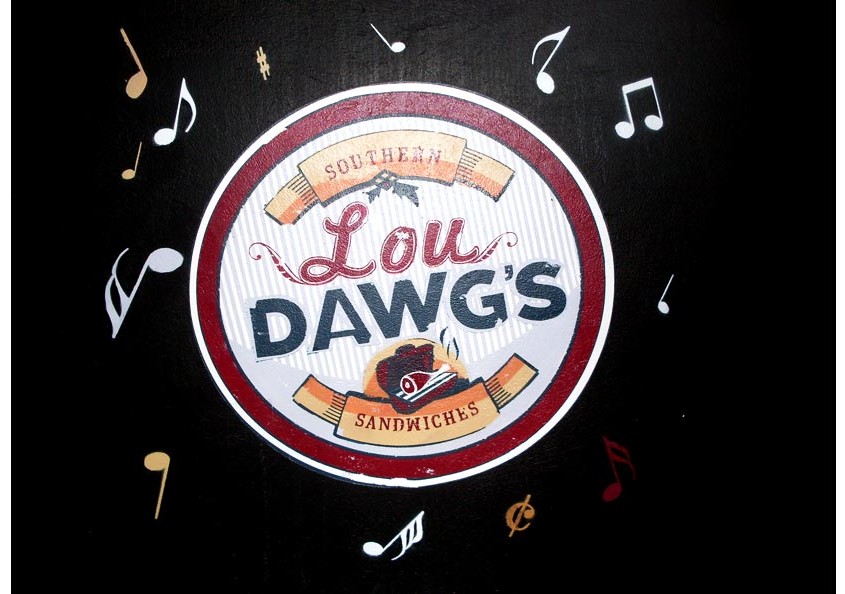 This project entailed designing and rendering signage and a mural in Lou Dawg’s, a restaurant located in the heart of Toronto near Church and Gerrard.
http://loudawgs.com/
76 Gerrard St E, Toronto ON

This trendy restaurant in the heart of the Ryerson University community wanted some signs painted and a mural also. They had some great space at the front entrance of their establishment for two hand painted signs. They also had a huge area in their back patio for a large mural. Then to top it off a mural inside with a few more logos painted around the main bar. The bar owner was working with jack daniels on a new promotion for a new liquor at the time. The product was Jack Daniels Tennessee Honey. This product was a great union with this restaurant being that the food and style they had was southern.

The entrance area had the logo of jack daniels and the logo of lou dawgs painted on the poured concrete walls. The really fun thing about the logo for Lou Dawgs is that it’s really striking when it’s finished, so as you’re working on it you are anticipating it being finished to see all the little details in the logo. These front entrance signs were made by vinyl stencils. The back area was the main ad for the Tennessee honey, there was small areas around the wall that had a graphic looking beehive in the form of hexagons. On the upper portion of the wall was the lou dawgs logo, below that was the jack Daniel’s Tennessee logo.

Inside where the band played is where we painted the mural, this was of a sax player silhouetted by the cool blue sky. His sax was not in the form of a silhouette and was painted to life like realism. It gave a nice contrast between the two.

For all Toronto locals, Lou Dawg’s is a household name. Lou Dawg’s is the premier barbecue and live music spot of the town. Lou Dawg’s has made it their civic duty to prepare tantalizing barbecue sandwiches with the background of show-stopping music, all combined to soothe the body, mind, and soul. The co-founders of Lou Dawg’s are Aaron Harris and Sean Smith. Lou Dawg’s came to be after Aaron tasted Sean’s pulled pork straight from his stove. He could not believe how much flavor a slice of pork could hold, much less how the pulled pork would taste wrapped by a bun. It suddenly became imperative that he gives people the opportunity to eat that kind of sandwich every time they want to. That was that, and the rest is Lou Dawg’s as we know it.

Lou Dawg’s got its name from Sean Smith and his wife’s pet dog, whose adoptive name was LuLu. Aaron got used to calling the dog Lou Dawg, and when they opened their business together, Lou Dawg’s just felt right. Lou Dawg’s is responsible for providing its customers with the ultimate service. For any newcomer at Lou Dawg’s, you can expect to be served anything from breakfast, lunch to dinner. Out of the confines of Lou Dawg’s restaurant, Lou Dawg’s takes care of catering and wedding eats. Every customer is promised a good environment, colored with good food and good music that ensures you have nothing but a good time.

About Church and Wellesley

Apart from the Church and Wellesley environment and structures catering to the LGBT community, the area boasts historic Victorian houses and apartments from the 18th and 19th century. Modern residential buildings have been constructed around surrounding neighborhoods such as Annex and the Garden District, just to mention a few.

Church and Wellesley hosts the annual Pride Week celebrations that attract hundreds of thousands of enthusiastic crowds. At the end of the Pride Week is the Pride Parade that takes place on the last weekend of June. On the same day as the Pride Parade, the Dyke-March (women-only) takes place. Other activities that take place in Church and Wellesley include the community fair. The community fair involves groups associated with queer culture.