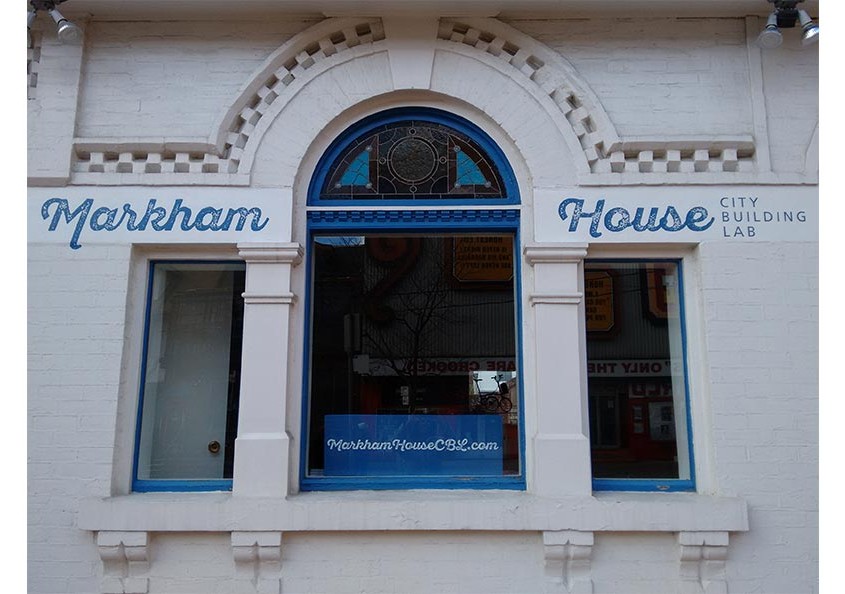 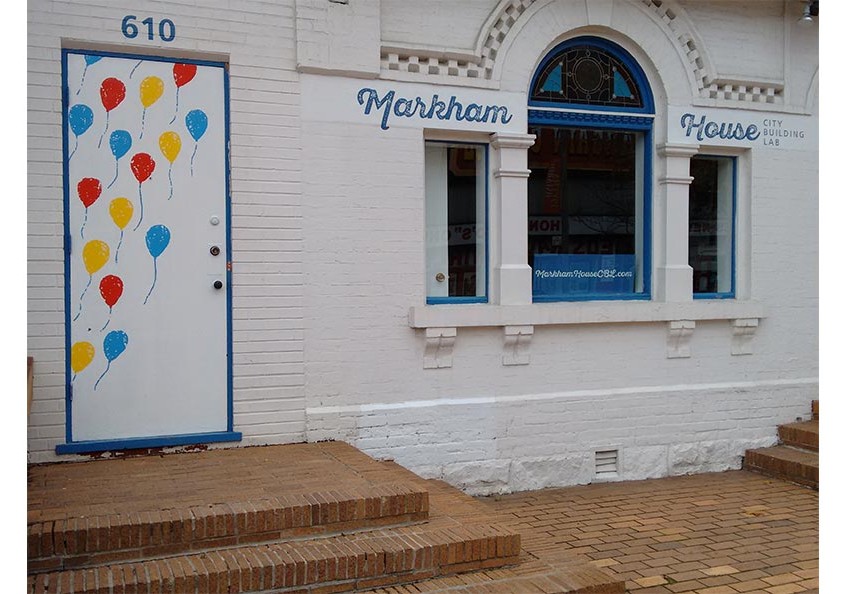 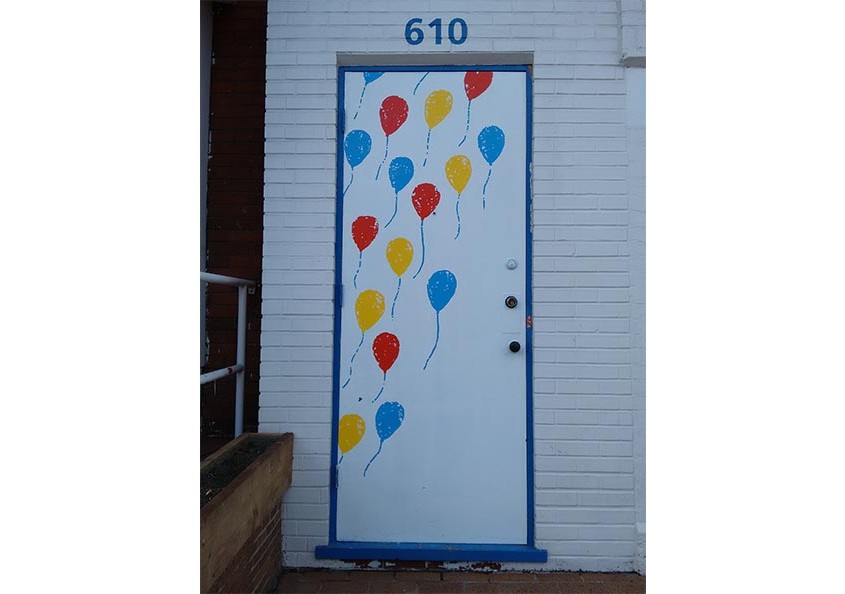 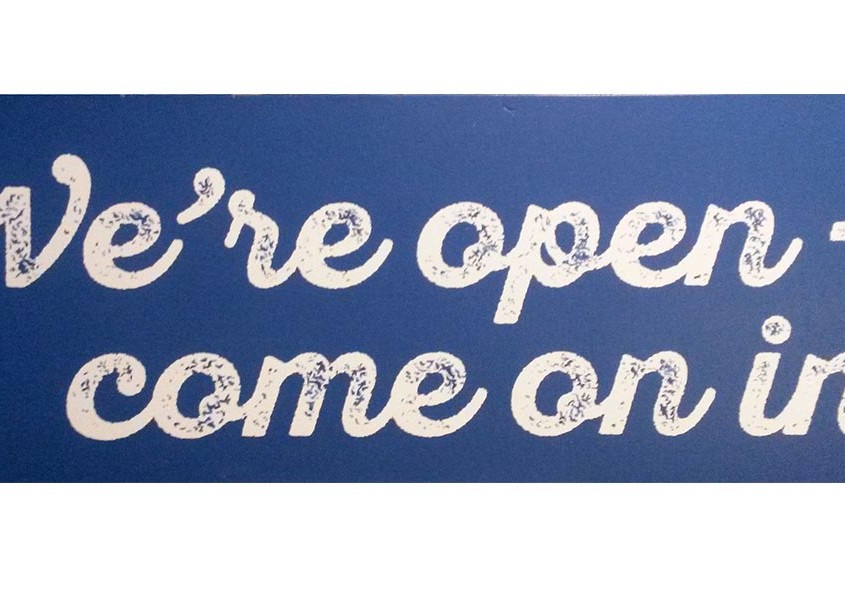 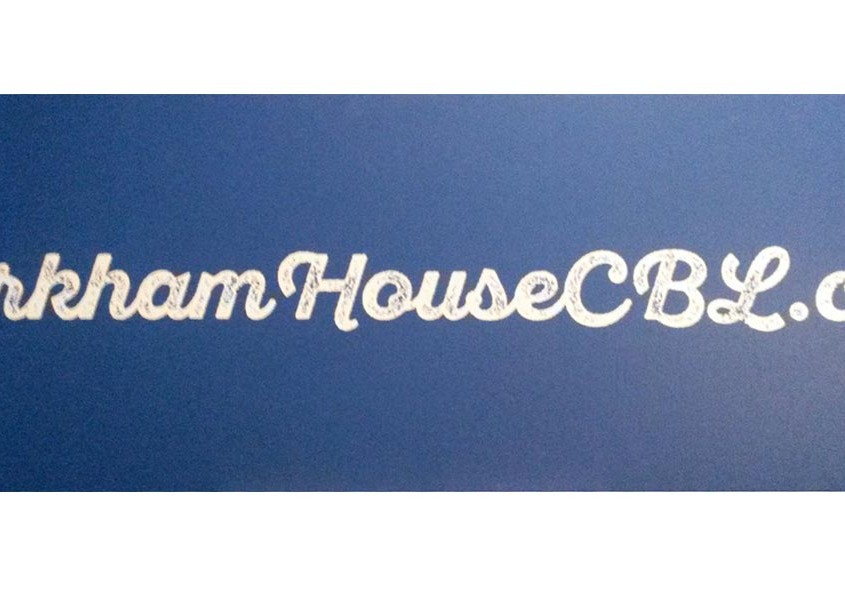 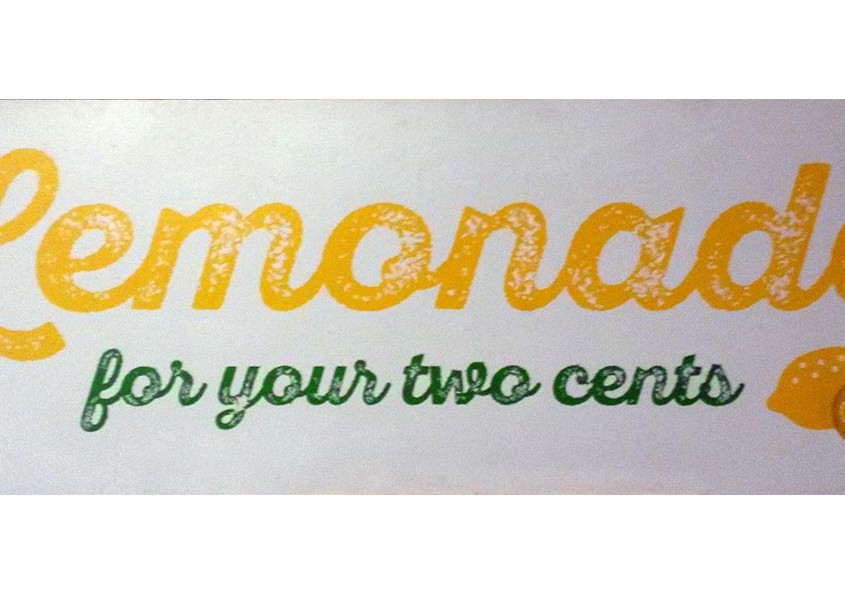 One sign read “Lemonade for your two cents”, a play on words to have the public opinion heard over some lemonade.

The front main sign alongside the jovial balloons can be seen shortly after you turn south on Markham St from Bloor St. The signage is enticing and piques the curiosity of passersby due to the bright blue font of the main sign and the bright yellow red and blue balloons. It will be difficult for people to miss the building.

A large bay window separates the main sign; the surface being previously painted provided us with a suitable substrate. A flat door provided us with a great place for the balloon mural. To make the surface look weathered we utilized a faux painting style – it took us a day and a half to paint the front area. We had two people on site to paint it continuously. A crisp and accurate finish was made possible using vinyl stencils. In order to reach the main sign area we put to use a telescopic ladder setup in an A-frame manner. It is common to setup such a ladder with the legs on one side longer than the legs on the other, in order to compensate for stairs or uneven ground.

We painted an additional three small portable signs for use on the inside of the building. These signs were painted in our studio using MDF as the sign material.

The Markham House City Building Lab is a community hub that aims to showcase the best of urbanism in Toronto, Canada. The lab is in the heart of Mirvish Village, and it shows the diversity of the people of the surrounding neighborhood.  Markham House City Building Lab focuses on educating people about the development of property. The lab also focuses on the life of the people of Mirvish Village and their diversity. The lab also focuses on educating people on the impact that the development of Honest Ed’s will have in their lives.

However, a combination of factors made the store to start declining. Staff reduced, and the store never rose to its former glory. After Ed Marvish died in 2007, the son was never enthusiastic to continue with the retail business that his father had started. The son had more interest in the theater business that he inherited. Honest Ed’s was put up for sale in 2013. The property developers announced that they would subdivide the property to develop apartment blocks, rental towers, among other developments.

The plan to redevelop Honest Ed’s involved the residents of Mirvish Village. The proposed plan aims to create a place that people can live, work and carry out their daily activities with maximum ease. The developers have conducted many meetings with the city authorities and the residents so that everyone can have a clear picture of the future Mirvish Village.