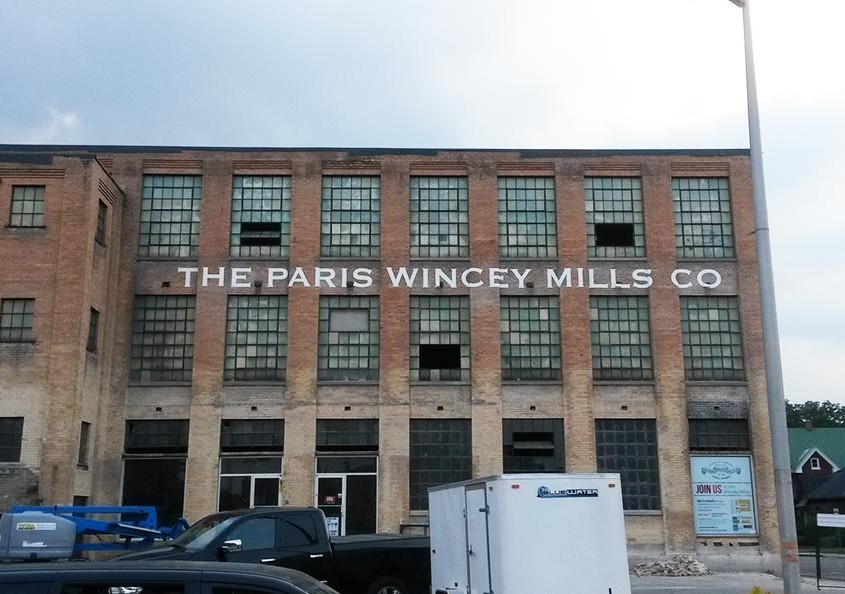 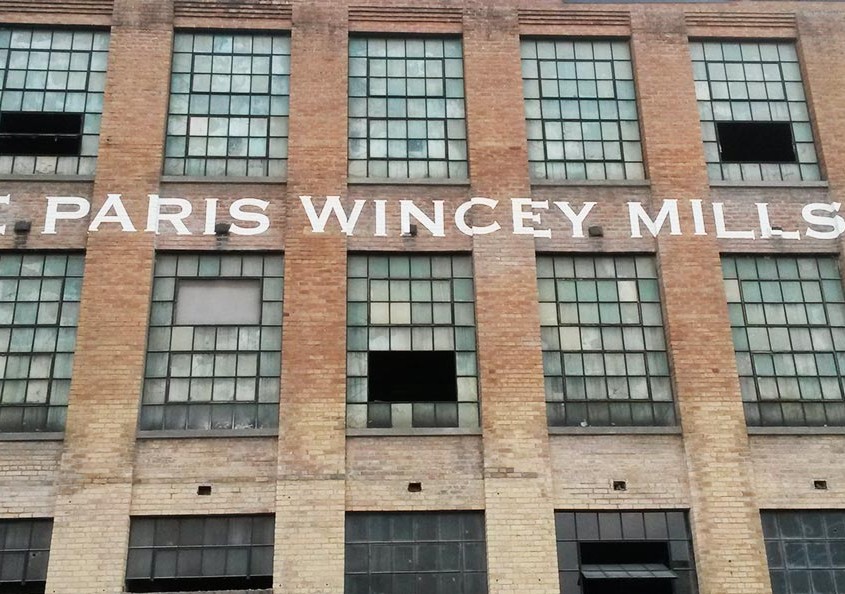 We were tasked to paint “Paris Wincey Mills” two stories high on the exterior of a building. It now is something you see when you turn the corner and go down the main drag of Grand River St. in Paris, Ontario. It’s a demonstration of the type of communities that still exist, where each one of the members gives back. Which the mill is.

Coming from busy Toronto, it’s a pleasure to sneak away and do some work in such a beautiful little town.

The font and the design were picked internally by the crew involved with the project. They had very specific specifications on exactly how they wanted the placement of the painted sign. We alleviated any concerns they had and assured them that we could accomplish what they wanted.

When we arrived in Paris the team was there and we went over the project. Since this was a full out construction site the team was able to supply us with a boom lift. This saved the crew money because then we didn’t have to rent one from our supplier.

We used a vinyl stencil for this project. The vinyl we used was 5-year intermediate mac tac, we did not use the standard paint mask vinyl because we needed a strong adhesive so the vinyl would stick to the brick. This proved to be a good choice because the brick recently had some tuckpointing done for restoration value and in certain areas caused a bit more dust than usual.

One of the challenges in this project was the slight protrusion on the brick columns after every window about 6 feet or so. The only way to deal with this is to have the letter wrap around the obstruction. This sometimes can create an awkward effect, unfortunately trying any other method will leave you with an even worse effect. It can be cumbersome navigating around the columns with the stencil but if you crank the tunes and mellow out all is well.

We worked late into the night and chose to stay up in Paris for the night as opposed to going back to Toronto just to come back the next day.

We used exterior Aura Benjamin Moore paint. This is the top of the line paint from Benjamin Moore and the best for this type of sign painting. When painting in the letters we used a 2.5-inch brush and a mini roller. Some areas you can use the mini roller and some you have to be more delicate and use a brush, the main goal is not to get to much bleed, because then you will lose your crisp outline. Sometimes little areas do bleed and we have to fix them. With a job like this that has no background colour you have to scrape off the paint with an Exacto blade.

Wincey Mills is a place that people can feel safe owing to the nature of its surroundings that are all natural. This aura gives people a welcoming feel and the best place to meet new people, purchase supplies and still learn the story behind it. Wincey Mills is located in downtown Paris and has a long and rich history that has made it slowly evolve into the global wonder that it now is.

The Paris  Wincey Mills building dates back to the 1800’s and is a major historical site in Paris that attracts visitors to the ever open market. Locals make the café a regular while the visitors are welcome to the environment created by the welcoming and friendly merchants who provide quality goods. It is a comfortable area for people to meet up, interact and take part in culinary events held at the test kitchens availed.

Paris Wincey Mills is a 125 years old building built at an old factory. The earliest products from Paris Wincey Mills was wool that was popular in Victoria and Halifax. After its completion, the first employees were 25 and then later grew to a large company that had over 125 employees.

During the great depression, Paris Wincey Mills remained open and employed over 125 people to serve all the visitors and residents during that time. In 1916, a mill added and the wincey mills operated both day and night. Paris Wincey Mills are part of the reason that Paris did not suffer as much from the great depression. It Went far to build the reputation of the mill and its popularity in the following years.

In 1934, Paris Wincey Mills increased the wages of its workers at a time that the depression was at it worst. This solidified the mill’s place in the society. The success of the mill was later challenged in 1959 after the end of World War II. The sales were so low that the mill was close to closure but saved by being sold to Listowel who owned a yarns and dyers company.

Paris Wincey Mills had a dam that the people used from time to time. Since the mill was at the center of two rivers, the floors were slightly elevated to prevent water damage and flooding when the rivers overflowed. Most of the raw materials used at the mill sourced from England and Scotland.

At the time, Paris Wincey Mills was built in the traditional sense with large windows for natural lighting. Artificial light was considered unsafe and even though protective ways of building a mill had been developed, wincey Mills was not interested in changing its style. Wincey Mills has repossessed its place in the community through its restoration and is now catering to visitors and locals alike. Paris Wincey Mills takes credit as having played a significant role in international trade.