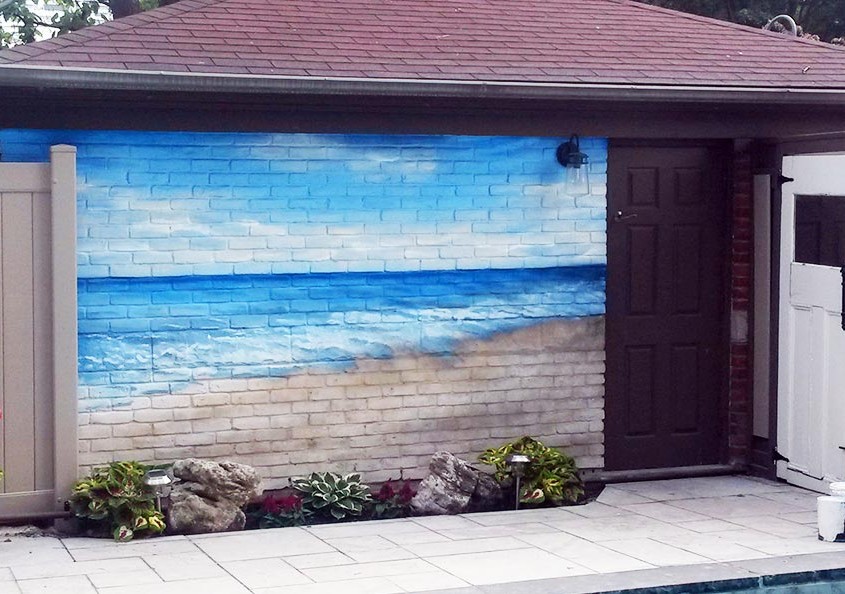 Poolside beach mural painted in the backyard of a Toronto home located in the Forest Hill neighbourhood.

A lovely couple that traveled to Florida and have very fond memories of their travels, wanted a mural to capture their memories. Sometimes the wife finds herself home while the husband is away for a while at work. The wife thought why not paint a beach scene out in the backyard, that way it will remind me of the times I enjoy most.

We went out to her residence to introduce ourselves and get to know what she had in mind. Often it is a great pleasure to meet our customers they can be very interesting and a joy to get to know. Needless to say, this lady was one that brightens up a room and she lead us out to the backyard and showed us the wall she wanted a mural on. We then walked around the area of the backyard to get a good field of view and see all the vantage points. Fortunately, this wall was mainly free of any obstruction so was a great wall to have a mural on. We then take notes on the specific details of the mural she would like and what she doesn’t want.

We then compile different concepts for the client to have a look over then make the final draft for the design of the mural. After a few concept were submitted we zeroed in on what we were going to paint.

This mural did not have a large amount of detail, so we were able to freehand the layout. After the layout was done we painted in the base layers with solid mid-range colors. Then we used a mixed media approach to spray paint and regular bucket paint that we applied with a brush. There was a small garden in front of the wall so while we were painting the wall we laid down drop cloth in order to not get paint on the plants.

Deer Park is one of the cities of Toronto that is at the center of Yonge Street and St.Clair Avenue. The name deer park dates back to 1837 and has been around since. The name and the community came about when the Heath family acquired 40 acres of land and gave it the name deer park.

When the 1850’s rolled around, the neighborhood had taken to the name and already had a school, race track and a hotel. In 1874, the land was bought off, and a large campus was built in deer park. In 1908, the city of Toronto annexed deer park, and by the time it was 1930, deer park became a residential community which it has maintained to date.

Deer Park residents belong to the upper middle class; it has been so since the 1930s when it became a residential district. It is also home to St. Michaels Cemetery, one of the oldest cemeteries in Toronto. The cemetery was opened in 1855 and has over 29000 graves. The cemetery faces the back sides of the buildings, deer park buildings have their backs to the cemetery, and they surround the cemetery from all directions.

Deer Park is a very notable community in Toronto that is full of apartment seekers who want the relaxed and serene environment that is deer park. Deer Park is a fast changing and a growing community.

In 1967, Forest Hill incorporated into Toronto. It is north of downtown and is among the wealthiest neighborhoods in Toronto. Most of the rich people in Toronto reside in Forest Hill. The growth in Forest Hill is remarkable considering that it was a village in 1923 before it became a community in Toronto that is rapidly growing.

Forest Hill, originally known as Spadina Heights that was about to be divided into two in 1960 when the Spadina Expressway was about to be built. The residents protested since the construction would render many people homeless. The expressway idea vanished in 1971.

The Forest Hill war memorial that honors those who died in the first and second world wars was put up in 1980. In 1993, the larger Toronto area realized that the favor extended to residents of Forest Hill where they did not have to take their garbage to the curb was significantly denting the municipal funds. The privilege ended. Forest Hill may have compared to Rosedale at one point, but unlike Rosedale, Forest Hill continues to grow and reach newer heights. The wealthy residents of Forest Hill attract more affluent investors to the area, and the community grows.