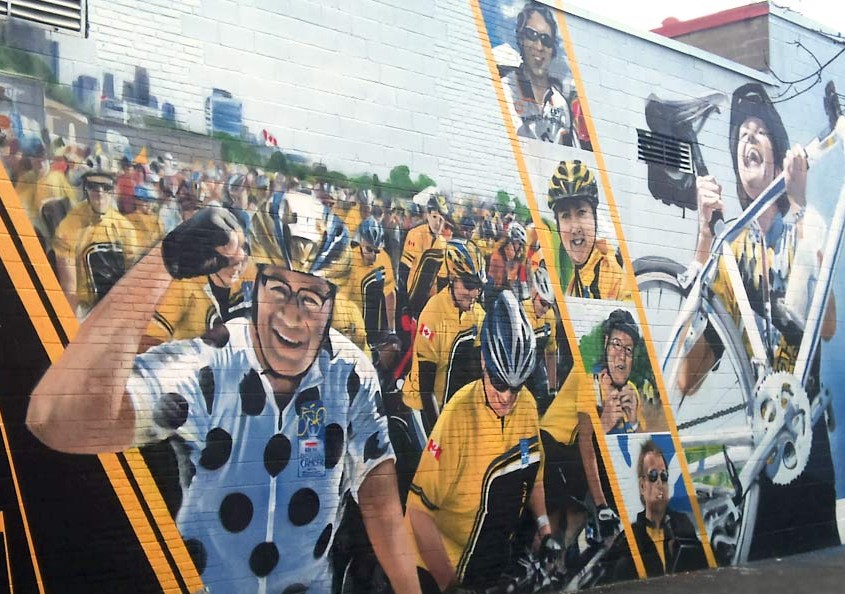 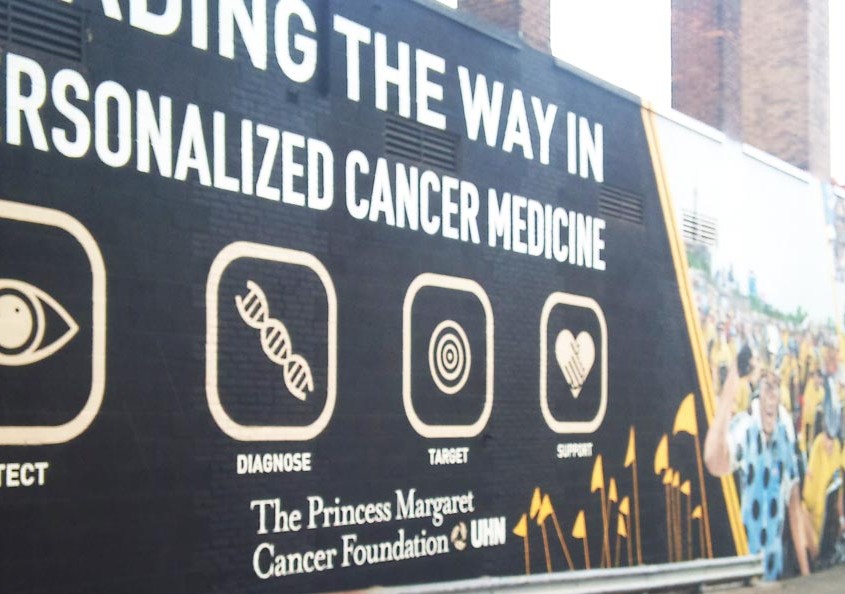 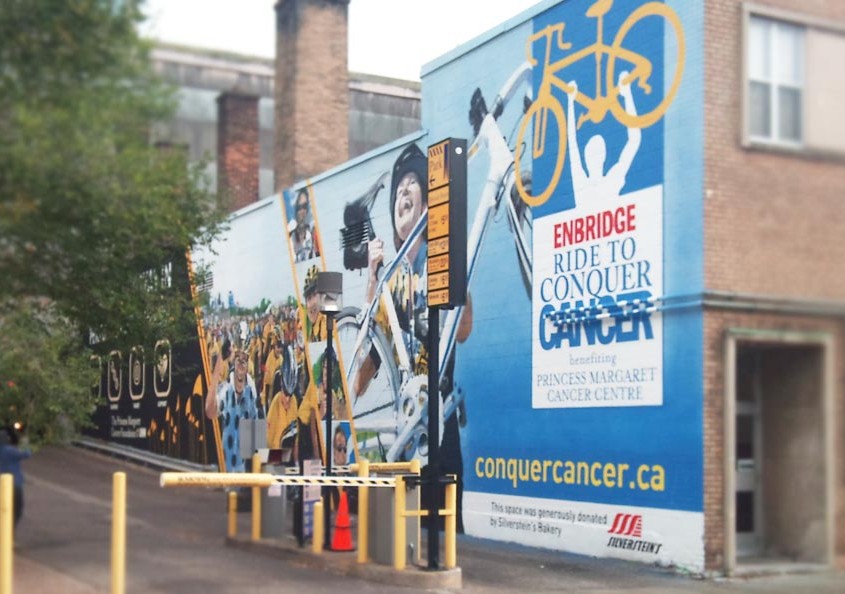 This mural is featured in downtown Toronto, on the side of (what used to be) Silverstein’s Bakery.
195 McCaul St, Toronto, ON

This is a great mural nestled in the heart of the city of Toronto, and quite nearby the school where a number of artists went to learn our craft; OCAD. The mural is located on the side of the building which was home to Silverstein’s Bakery.

The design is a good example of dividing up the canvas. The bold black area with large type is very useful, as you come out of the driveway from the garage, it provides you a call to action and clearly lets you know what the motives are of this mural. As you come along and further onto the street you then are presented with successful participants of the bike ride and just before you leave the mural you see the grand finish with a woman lifting up a bike in celebration.

The wall was made out of large cinder blocks and had been previously painted with a few murals in the past. The mural before this one had been there for a long time and it was time for a new one.

We did most of the job at night time. This mural was right beside a high traffic parking access laneway. During daytime hours it would not suffice to have the lane blocked for any reason.

Silverstein’s Bakery has provided bread and pastries to the residents of downtown Toronto for decades. The bakery opened in 1918 by Kalman Silverstein who had just settled in Canada from Poland. Silverstein brought along his family and his secret to the amazing bread which was rye. He introduced this bread o the people of Baldwin Street, and it was very positively received.

Having started with a brick oven, Silverstein soon made his mark on the people, and the business began to grow. While he baked, his family assisted him in delivering the bread by a horse. He was greatly known for his cinnamon rolls, and soon word spread like wildfire about his rye bread.

Kalman Silverstein was a generous man that the people grew to love. In those times, not many people could afford ovens, and he, therefore, allowed the neighbors to use his oven every Friday evening when he would close down the bakery for Sabbath.

Kalman got support from his sons who joined him in the business in the 1930’s. By this time the bakery had grown to the point that it was the primary source of bread and pastries for restaurants. It Saw to the bakery’s brand name “Toronto’s best rye bread.”

The war broke in 1939; this saw Kalman send his two sons Dave and Murray to fight while his younger son took over helping at the bakery. His two sons later returned from the war and rejoined their father and younger brother at the bakery. They mainly did deliveries even late at night after they had watched a game.

In 1953, the three sons took over the business from their father and relocated the bakery to Mccaul Street. They did away with pastries and mainly focused on artisan bread and rolls that were hearth baked. During the reign of the three sons, the bakery continued to gain popularity and became the primary supplier of bread to retail stores in Toronto.

Silverstein’s Bakery adjusted in that it could accommodate the needs of the clients regarding creativity and in that it was among the first bakeries to deliver pre-sliced bread. In 1960, the first submarine store opened and requested a 12-inch bun from Silverstein’s Bakery and in the years that followed the bakery made muffins for hundreds of shops.

The bakery was passed down the line of Silverstein’s and finally owned by three sons of the youngest son Sonny. All the baking ingredients used since 1918 by Silverstein’s Bakery have been natural products that gave the bread even more taste and health.

After over 100 years in business providing the best rye bread in Toronto’s restaurants and catering to banquets. The Silversteins bakery finally shut down with no warning. Many people express their shock to the news as no warning or reason for the closure was given.