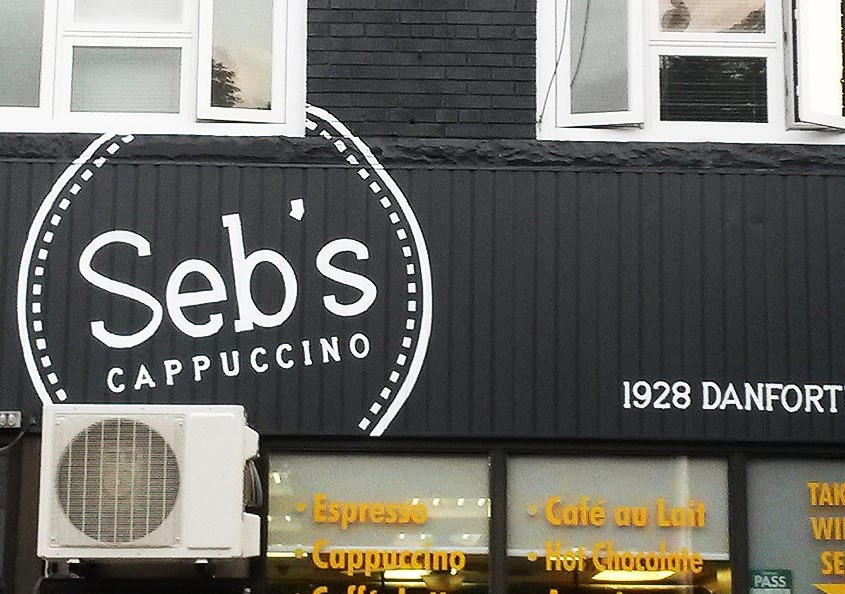 The owner was having a renovation done to the exterior entrance, part of the job included putting up new siding. The old sign was time to come down so they hired us to paint the new sign. Sebs hired a designer and came to us with the new design for his establishment. The designer came up with a badge/emblem situated in such a way that it was slightly cropped.

You can see the sign on the north side if you would be driving on Danforth Ave, either way, east or westbound.

We did this sign using Benjamin Moore paint. We also used primer for the first layer of the sign, this way it will adhere to the surface better. We used an A-frame ladder to access the area. The height wasn’t high enough to warrant using anything else, also in the front entrance was a large fan that blocked us from accessing the area so an A-frame ladder suited that job perfectly.

Mac tac stencil vinyl was used for this job. This wall was a bit tricky to work with due to the corrugation and uneven surface. This creates a wave effect on the stencil while placing the stencil onto the substrate you have to conform it to the corrugated surface with exact precision. We sprayed the sign in after the stencil was laid on, in this situation after we peeled off the stencil there was a little bit of overspray which we touched up to leave a perfectly painted sign.

We worked at night to do this job because Sebs is a very busy place, and the customers like to sit outside in front of the establishment. Working at night was not only a benefit for the business but for us as well, we don’t have a lot of traffic making our job more difficult. The first time we worked into the wee hours of the morning we noticed that the moment Sebs opened (at the crack of dawn) customers started pouring in. That really assured us that we made the right decision to do the work at night.

Seb is the owner of Serbs Cappuccino. It is in Danforth East and has been his business since 1991. Sebs cappuccino belongs to him and his brother Matteo. They took over the café from Sam. The café was formerly known as Sam’s café where Seb and Matteo worked, learning and mastering the tools of the trade

Sebs Cappuccino serves the best coffee in the neighborhood; it is evident in the fact that the café overflows with customers. Sebs Cappuccino offers the customers a fantastic environment where they can interact as they enjoy their coffee.

The café is the pride of the neighborhood as the regulars greet each other like best friends as the wait to get their coffee. Seb takes pride in providing his customers with great coffee that keeps them coming back but does not tell the secret to his amazing coffee or where he gets his beans.

Sebs Cappuccino has the regular drinks, lattes, macchiato, espresso and cappuccinos. On occasion, Seb has pizza in the café and, in a matter of minutes, it’s all gone. Customers are engaged in conversation and also can watch games on the big screens in the café. Being from Sicily, an Italian theme is evident at the café. There is even the option of an Italian breakfast that comprises a Latte and a ricotta cannoli.

Business is always booming at 5 a.m. café, and every latte, cappuccino, and espresso are better than the last. Seb ensures that every customer gets the satisfaction he is looking for, and a good kick starts to the day or end of the day. The café opens its doors at 5a.m in the morning and remains open until midnight every single day.

East Danforth is a village in the far east of Toronto that besides being where Sebs Cappuccino is, it also has a population of over 14000 people. The area had seen significant growth and changes since the 19th century when it was known as Coleman postal village. Between 1910 and 1930, east Danforth was mainly known as a streetcar suburb but ended in 1966 by the Bloor-Danforth subway line.

In the 1970’s, apartments began sprouting in Victoria Park which saw the growth of the area. A shopping mall was built in the area in 1962 and later upgraded in the 1990’s. The mall is strategically on the far east of the area which is also the shoppers’ world Danforth.

East Danforth is home to a large Muslim community. The largest mosque in Toronto, the Madina Masjid is under construction in East Danforth. The area keeps growing and attracting more people and businesses.