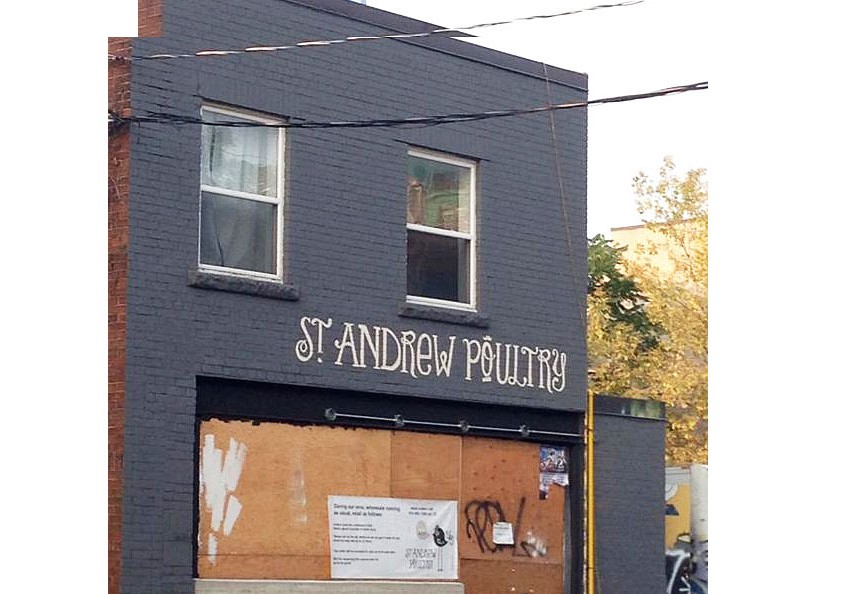 We painted this simple, yet elegant sign for St Andrew Poultry, located in Kensington market.

Storefront sign painted above the front entrance. The font used was very original and the space was ideal for this size and type of font. When walking or driving past this store you have a great view of the sign and clearly know what the establishment is.

The sign was projected, we used an LCD projector. A long extension cord was needed to get power to the projector. The reason we needed the extension cord is that we had to have the projector on the other side of the street. The throw distance on the particular projector we were using that day was not that large, requiring us to have the projector far away from the surface it is projecting on to get the desired size of the image we need. We projected at night, mainly that is when projecting is done because the darkness helps with seeing the image.

We then painted in areas with a small brush, where we wanted very precise lines we used quarter-inch tape. Taping of lines can help when an area will need numerous coats of paint and the alternative to painting it in by hand will be slower. We used a telescopic ladder in the A-frame position for access to the area. The telescoping ladder is very versatile and can be maneuvered in hard to navigate areas. This case in point had a ramp that created an uneven work area but the versatility of the ladder allowed us to circumvent the ramp.

This was done in the summer in Kensington market. We started in the early evening, so it was dark enough to project once we finished the outline of the letters we called it a night. The next day was a very warm summer day and fortunate for me their was a parking spot I could use, parking in Kensington market can really difficult.

In the end the sign turned out perfect and is highly visible.

St Andrew poultry is a retail shop for fresh and affordable meat in Kensington market. Although it has closed, the store has offered its services since 1962 and has left a legacy in Kensington market. The shop now belongs to a dentist Jerry Jesin who now owns the entire wholesale and retail businesses.

The closure of the store was a great shock to its clients as they just woke one day to find the place paper covered and the website pulled down. Many customers feel the weight of the closure as their favorite go to store. The store posted on Facebook to inform customers to bear with the sudden shutdown.

For decades, St Andrews poultry has been a popular market for fresh meats at the most affordable prices which are why the store commands a significant following. The years of experience that the store has garnered are enviable, and it is a huge loss to the people that the store is closed down.

Kensington market is a great neighborhood in downtown Toronto that consists of all kinds of individuals. The market caters to a vast number of persons in the metropolitan Toronto area. In 2006, Kensington market became a national historic site of Canada owing to its unique and multicultural activities.

The market is known as the one market which people take pictures of more than any other place in Toronto. The market neighbors residential neighborhoods, a school and a health facility making it a strategic place of business. Retail and wholesale stores thrive in Kensington market.

In the early 20th century, Kensington market mainly consisted of Jewish immigrants. The area has residential homes, and the first market in the area became a Jewish Market. Over 60 000 Jews were living in the area between 1920 and 1930, they opened small shops and worshiped in the over 30 synagogues that were in the area. The majority of the goods available in the Jewish market, now Kensington, include products that come from the homelands of the immigrants.

When the Second World War ended, most of the Jews moved north, and the Azores took their place in Kensington market. It made the market a more diverse. Many more immigrants came into the area, and the market became a multicultural area.

In the 1960s, the small packed and densely populated houses were about to be demolished and replaced with apartment-style homes. The plans for these housing project ended with the election of David Crombie as the mayor of Kensington market.