Sign painting is one of the oldest forms of art we have, one that has seen rises and falls in popularity, style, and prevalence. One thing the genre has never lacked is talent, and perhaps the most well-known sign painter in the world has dedicated his life to creating beautiful signs and teaching other artists about the craft and the industry. His name is David A. Smith, and he may just be the most popular sign painter in the world.

Smith got his start in the 1980s when he left school to become an apprentice sign painter with Gordon Farr and two of his associates. He spent the next five years learning the skills of the trade. His teacher, Farr, was a unique teacher, one who “had an almost uncanny ability to paint letters, accurately laid out, without even a preliminary sketch,” according to Smith’s website. It was during this time Smith learned about drafting, letter painting, and how to draw beautiful pictorials.

By 1992, Smith had opened his own sign painter shop in his hometown of Torquay and specialized in everything from “vehicle graphics to 3D installations.” But it wasn’t until a fateful trip to New Zealand that Smith met Rick Glawson, one of the world’s best-regarded sign painters and a member of the world-famous Fine Gold Sign Company. Glawson was “universally regarded by his peers as the godfather of gilding, with a reputation for sharing his encyclopedic knowledge of glass decoration with eager students of the craft,” and Smith soon became his close friend. Smith learned many new and important lessons about sign painting from his new mentor.

Smith eventually sold his painting shop and now focuses more on Victorian-style glass painting, creating beautiful and intricate works that are sold and showcased around the world. He also teaches and educates artists in the many skills he’s learned from those before him, including Gordon Farr and Rick Glawson. Smith views his educational work as paying the debt forward and “shares the fruits of his study with his many friends, old & new, in the sign trade, through courses, step by step instruction and one-to-one chats on the phone or internet.”

If you are a sign painter or a fan of sign painting, you have probably heard of David A. Smith. His work has become the standard by which glass window signs are judged, not only for their ingenuity and craftsmanship but for their distinctive design. Smith continues to create beautiful pieces of art in the world of sign painting, but also dedicated much of his time to teaching the next generation of sign painters. While sign painting has dwindled in prevalence since Smith began his career, his talent and passion for education ensures that the art will be with us now and into the future. 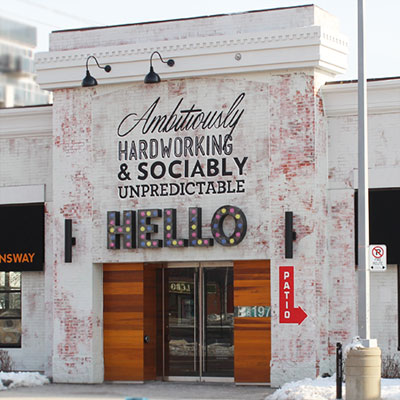