You are here: Home / soten

The world of graffiti has often focused on pictures over words, and that has caused an important part of the industry to die away. The art of graffiti writing is rarely seen beyond tags these days, or as complementary pieces to pictures and murals. But for one Danish street artist, the art of graffiti writing is more than declaring your graduation year. It’s about harnassing something different in the artform and bringing it to the forefront again. 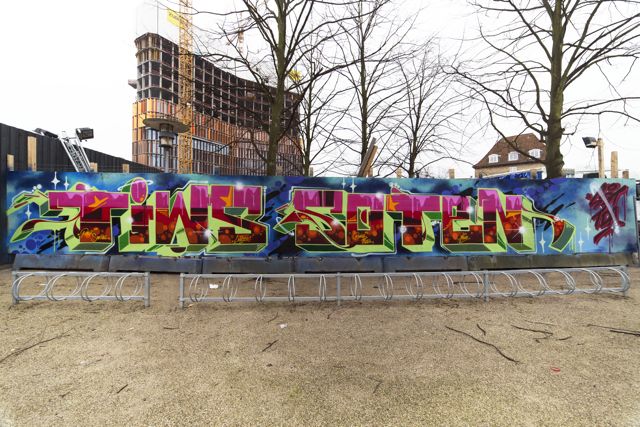 Growing up in Copenhagen, Denmark, Soten was met with adversity when it came to his artform. But despite being a wonderful European city, Copenhagen was notoriously strict about graffiti, and Soten had to get creative about expressing his creativity. But Soten has since seen a shift to more tolerance, and he gives his peers the credit over himself. “Thanks to the big work of a smaller group of writers and today,” he said in an interview with Molotow, “You see more and more big walls in the city and with a increase of halls of fame the general public are getting more and more tolerant towards graffiti.”

But there are a few, he says, that would rather graffiti stays illegal in Copenhagen. Not for the usual reasons, however, but for a taste of the glory days. “The biggest tolerance problem in Copenhagen is these young… [kids] with a closed group of old schoolers who have left the game years ago or maybe do 2-3 pieces a year,” he explains, “[They] try to preach bullsh*t about how graffiti should be kept illegal thing. Instead of letting the whole movement grow they try keep graffiti down for the sake of they can sit and reminisce about when they where the boss.”

Soten thinks, graffiti should be free for anyone to do, and people who want to keep the movement attached to its illegal routes aren’t helping the industry or the artistry. They are, according to Soten, holding the entire medium back.

But Soten’s more than just a political figure for the street art scene in Copenhagen, he’s also a talented graffiti writer who’s travelled the world doing art for all kinds of projects. His writing ranges from scrawls to full 3-dimensional experiences, and they’re probably best described as traditionalist with a hint of the contemporary. Soten’s style is obviously influenced by the brighter colours and effects of the L.A. scene, but he also infuses it with a more recent English minimalism in much of his quieter work.

Soten’s distinct style and love of writing shows a marked change from the usual picture-focused mural work that happens in today’s climate. But that doesn’t mean graffiti writing is inferior, and artists like Soten are proving that everyday. His work reminds us that there is much about street art that’s still misunderstood, and artists need to preserve and forward the more obscure aspects of the craft to renew enthusiasm and keeping the artistry alive.