We just can’t get enough of the world’s tallest mural, located in our very own City of Toronto. We traveled across the city, snapping up shots wherever we could, in an effort to illustrate just how far away you can see this mural. Our photo shoot even took us to the Gardiner highway. However, this journey was not enough, and served only to whet our appetite. You see, we had a hunger that could only be satiated by taking to the skies, and so we did (with a little help from helitours.ca).

What you see below is a composition of our adventure to capture the world’s tallest mural in it’s full glory. Below is each image from our original vantage point followed by a zoomed in version showcasing the mural. At the top of the page we’ve included a map detailing the locations and distance of our shots. Not only can you get a good view of the mural but these are also some excellent scenic pictures of our great City of Toronto.

A Map Of Our Photos 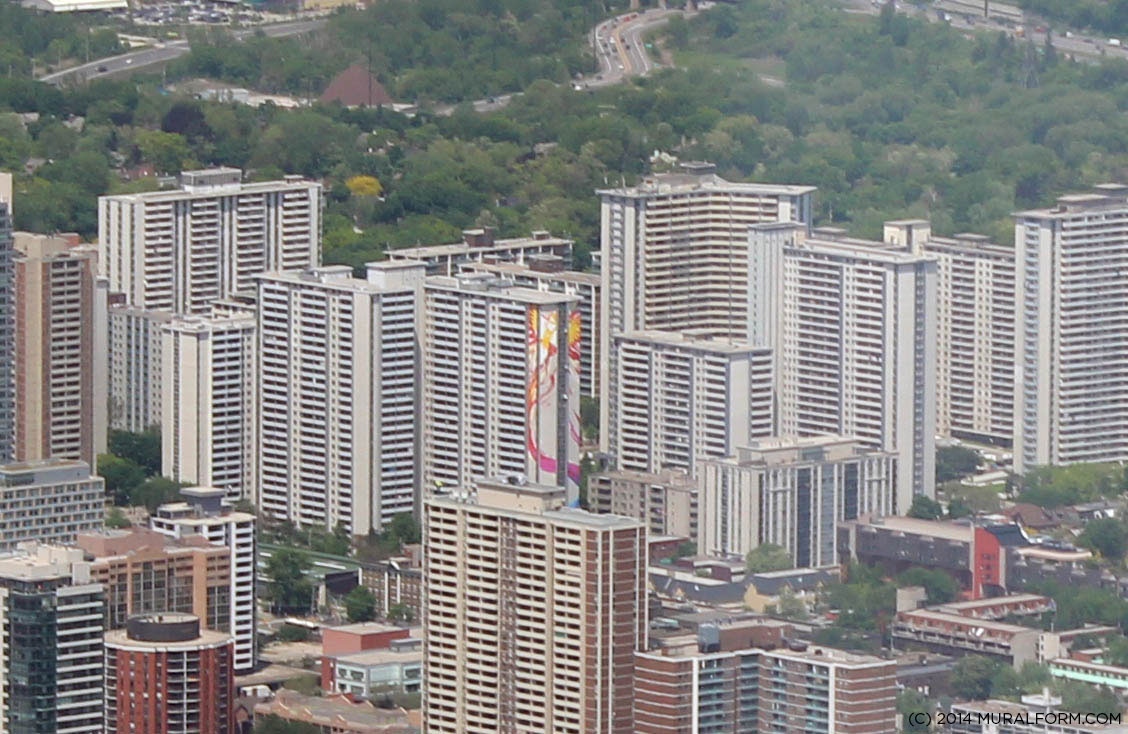 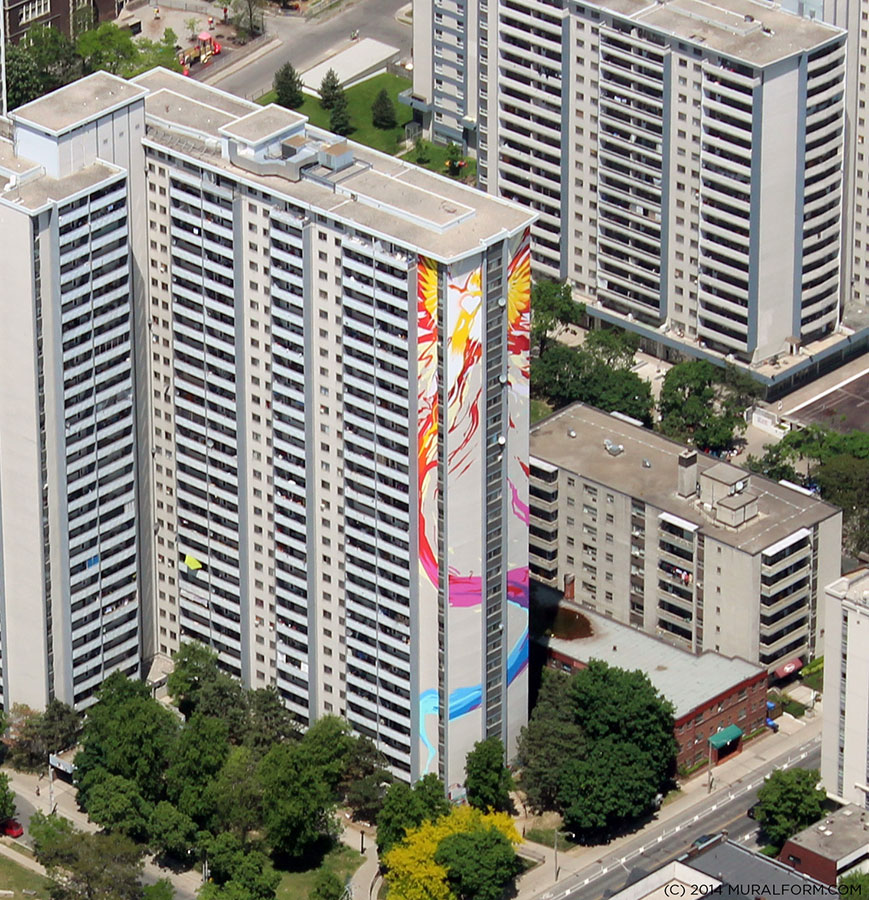 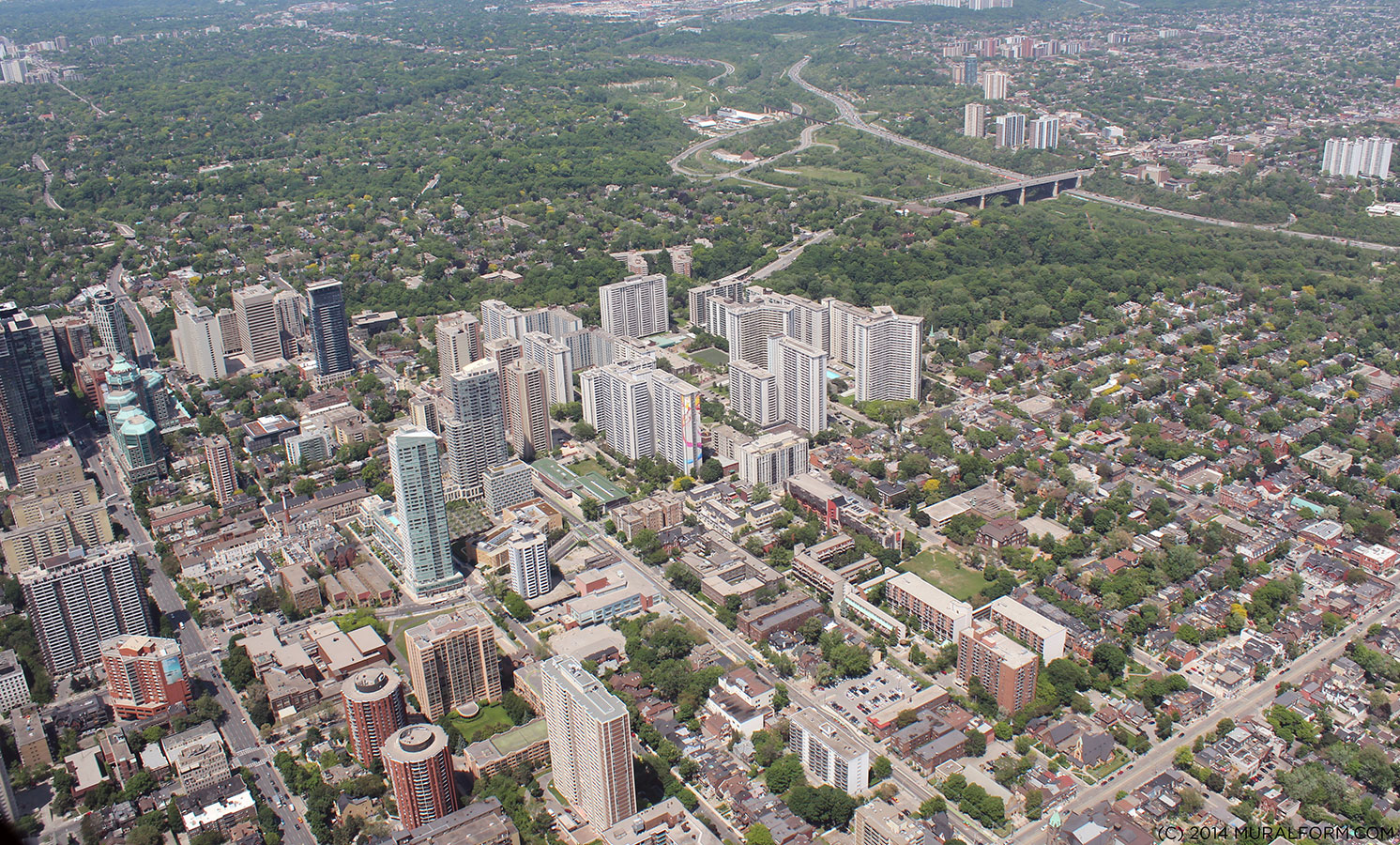 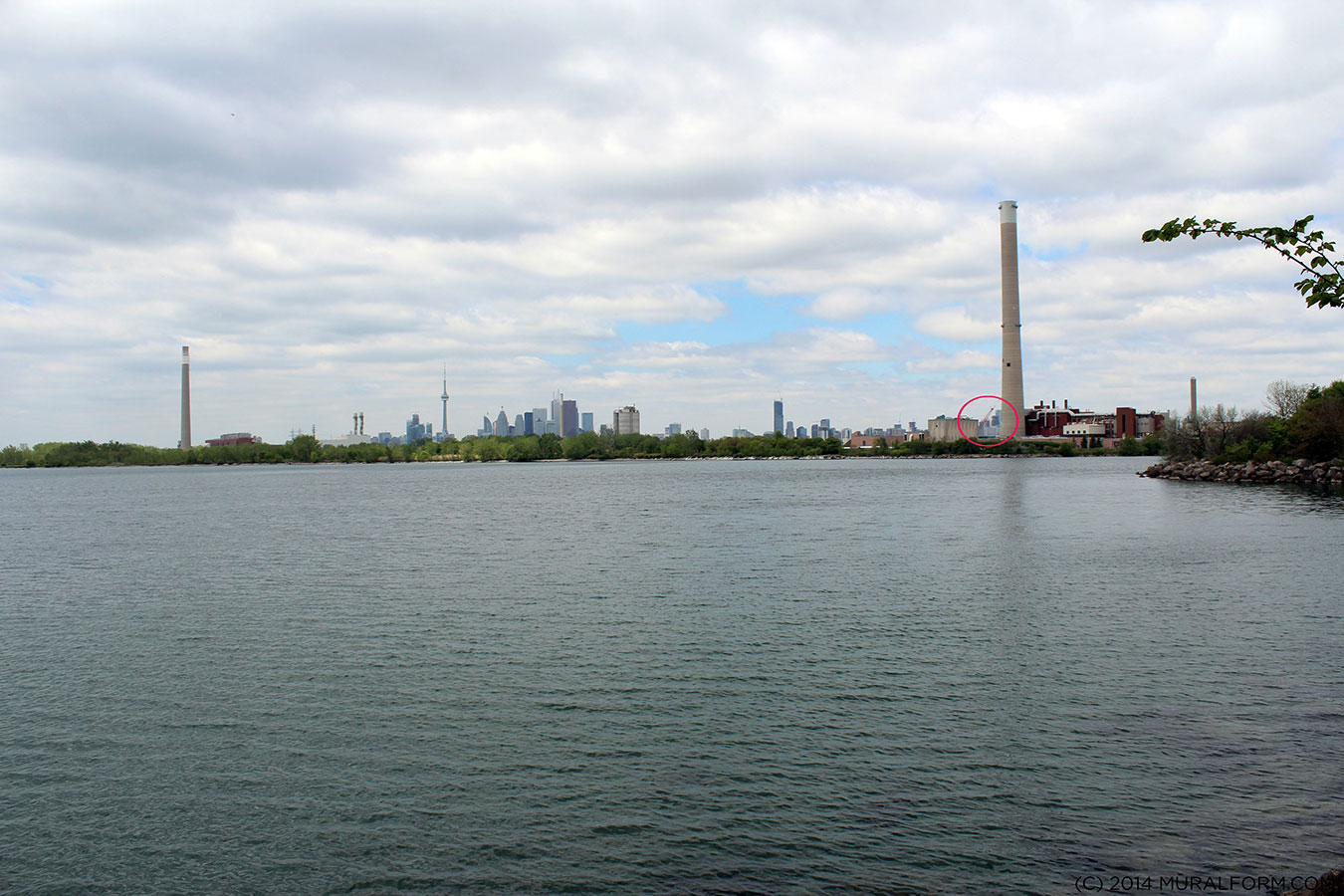 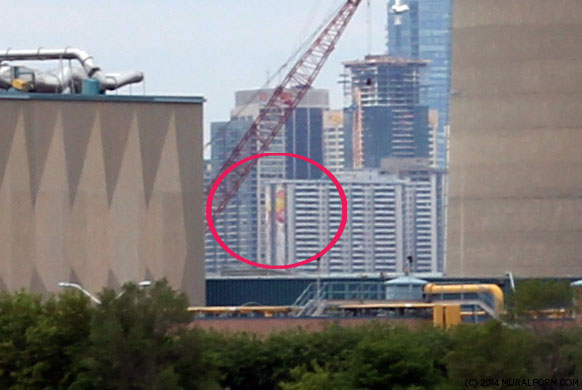 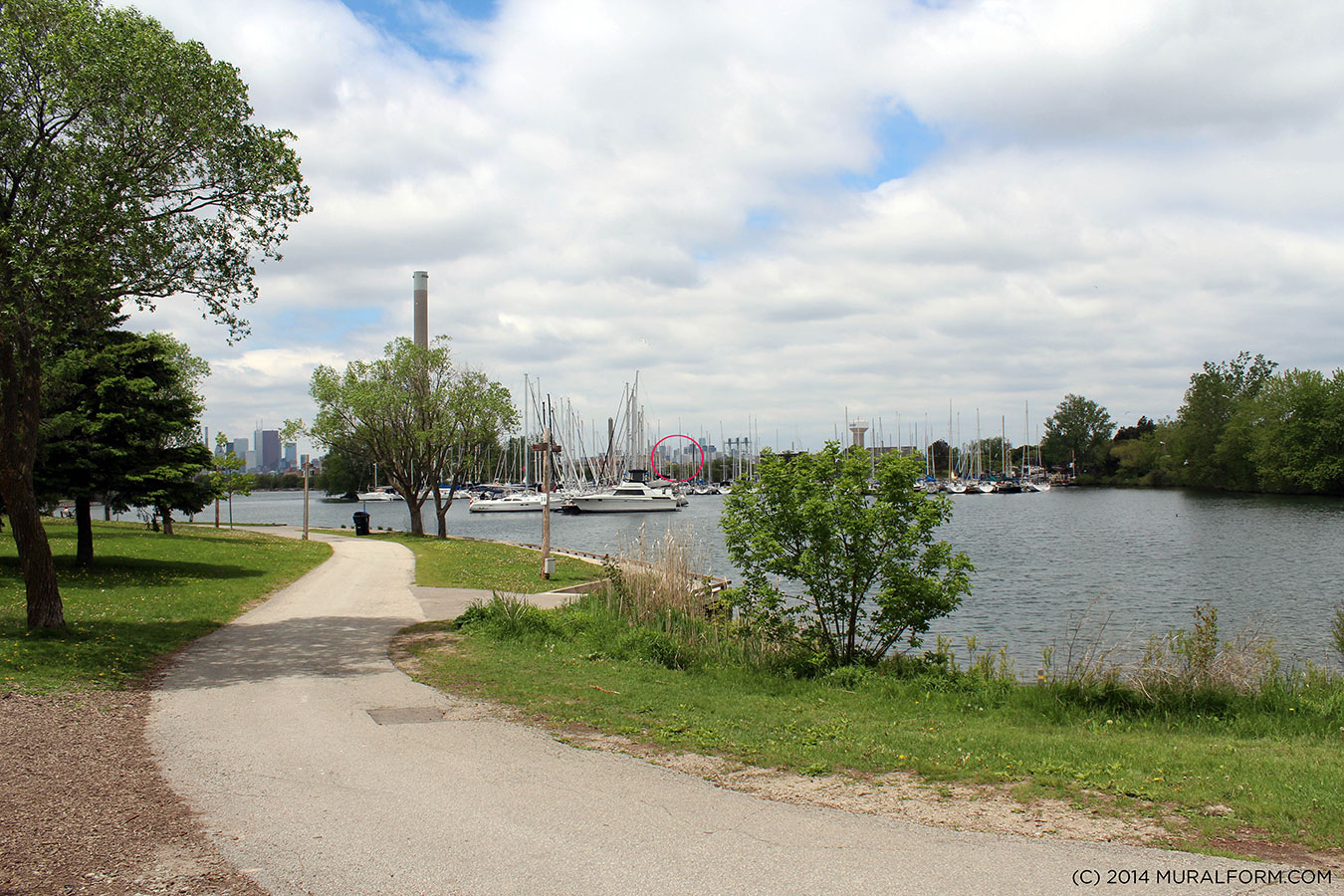 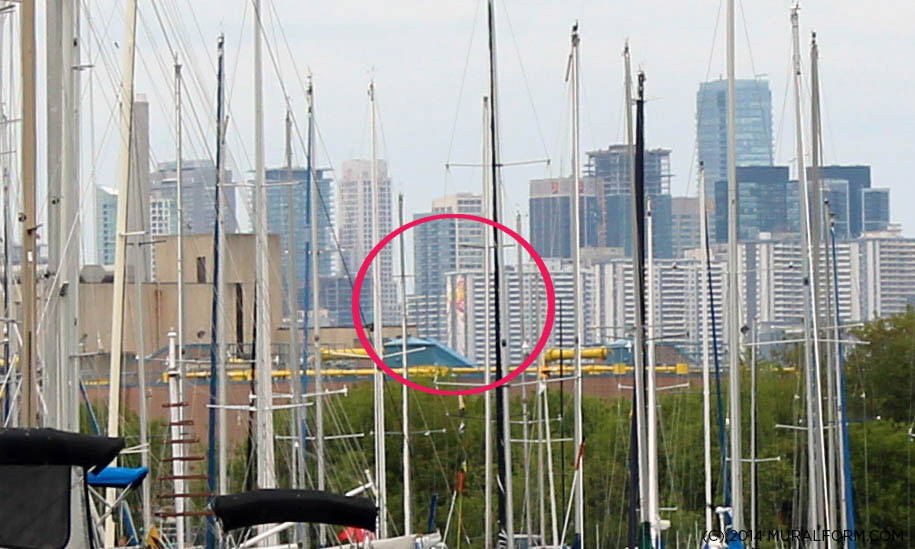 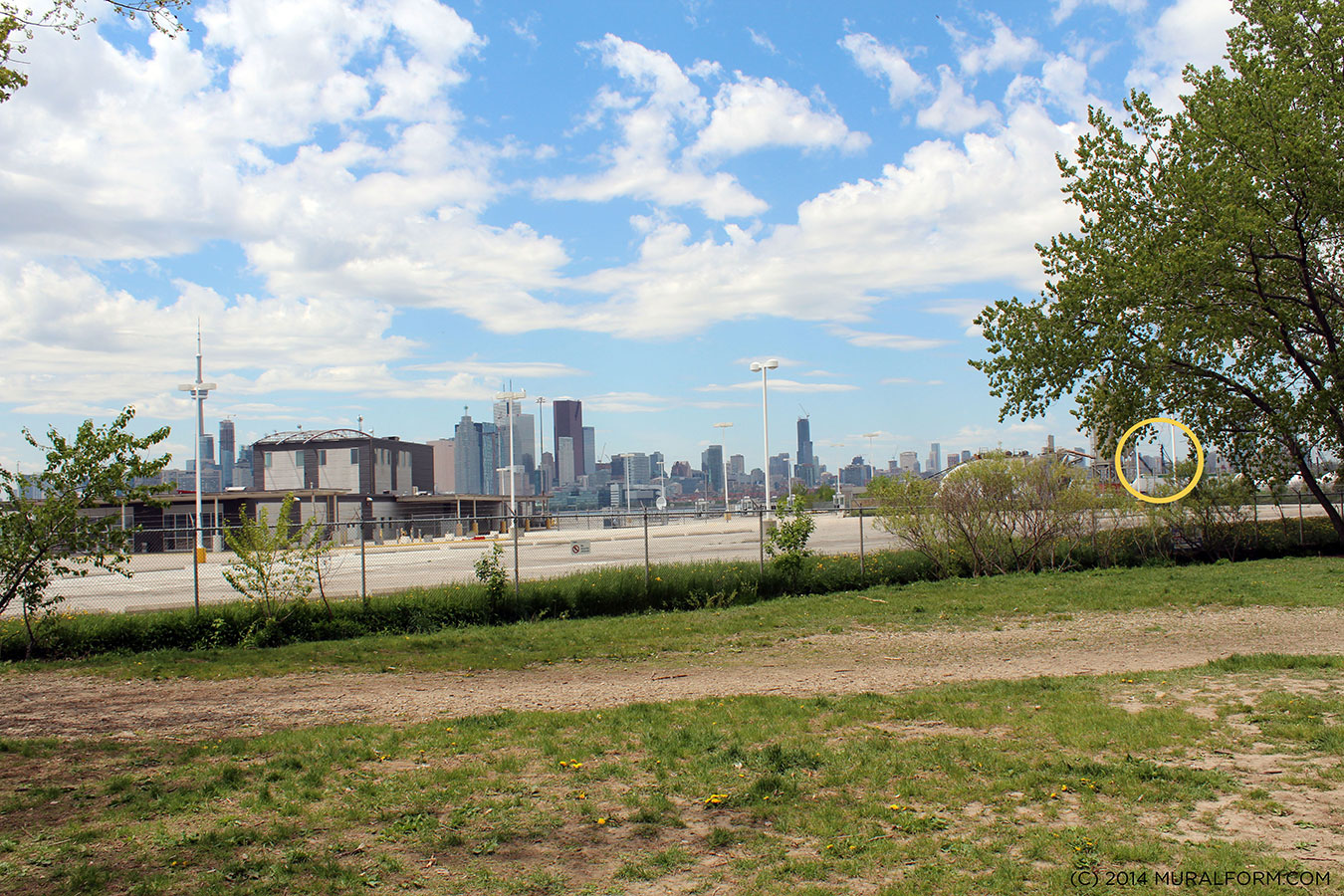 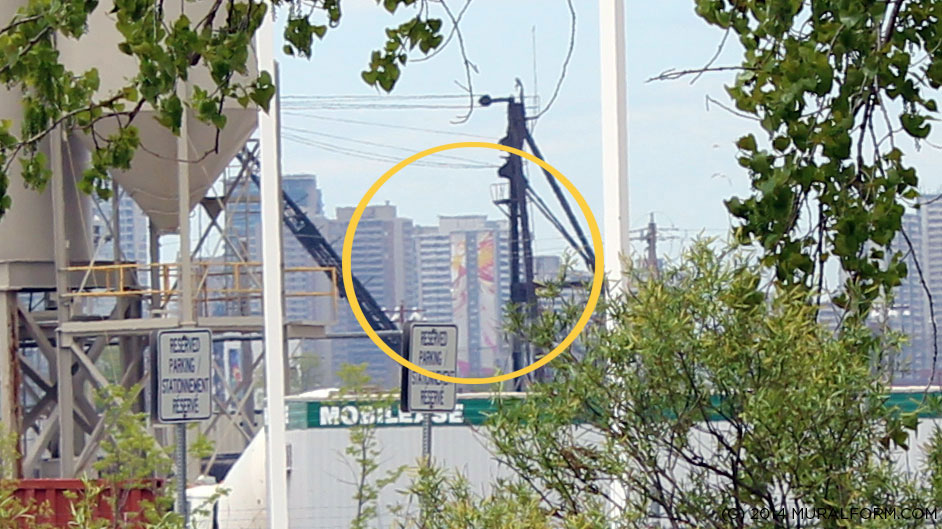 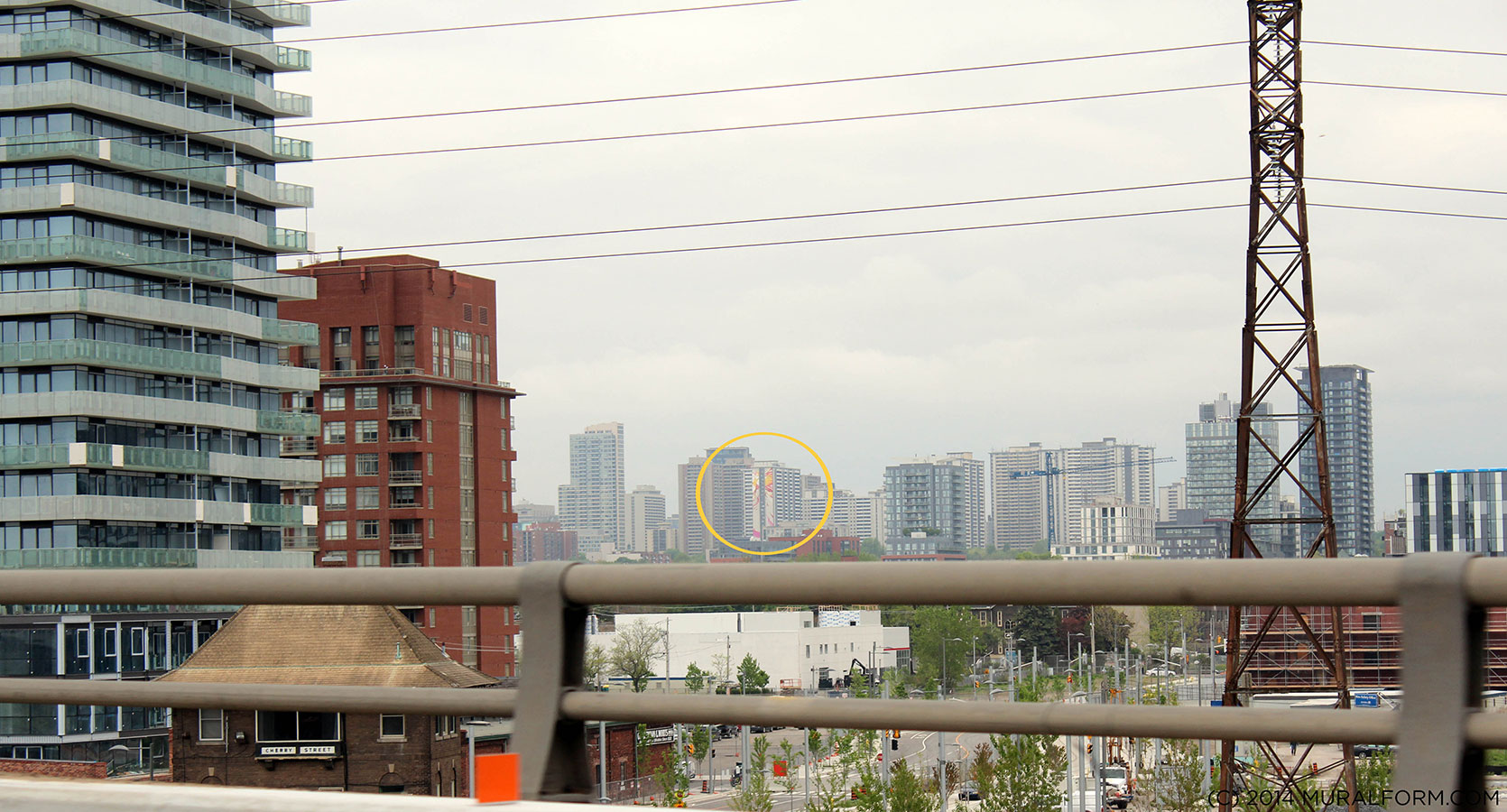 What started as a devastating housing project fire is now a giant piece of art, a sign of a neighbourhood on the rise, and a World Record.

Three years ago, a fire ripped through 200 Wellesley Street East in St. James Town, leaving residents homeless and in an already troubled neighbourhood with yet another problem. The residents banded together in those times of need, but they decided to go one step further. Now, thanks to community involvement and some dedicated muralists, St. James Town is home to the world’s tallest mural, one that shows off their indomitable spirit.

At nearly 30 storeys tall, the St. James Town mural is three times higher than the world’s largest mural, the famous Berlin painting created by French company CitéCréation. That mural, a stunning 20,000 feet in size, takes otherwise drab city housing projects and gives them new life, just like the mural here in Toronto. But where Berlin’s mural incorporates trees and nature to blend the concrete into a nearby park and zoo, the St. James Town mural doesn’t blend in or try to be natural. Instead, it heads to mythical majesty, and a powerful metaphor.

The mural depicts a large Phoenix rising from the ashes, a fitting metaphor for the building’s history and a signal to St. James Town’s future. Phoenixes are known for being born from fire, for rising from a tragedy as something more powerful and beautiful than what came before, and certainly this Phoenix is a symbol for rebirth and rebuilding in the distinctive and hardy Toronto neighbourhood. This part of town has known hard times, from poverty to overcrowding, but from tragedies like the building fire is an opportunity to rise, to fly.

And while the Berlin mural was the work of a private company, this mural is the combined efforts of and local artists, excited citizens, and some help from the STEPS Artivist program, led by Toronto artists Jason Rouleau, Ryan Dineen, and Sean Martindale. The mural is just one of the STEPS (Sustainable Thinking and Expression on Public Space) Initiative’s projects, but certainly their largest to date. The initiative was started to employ artists and local citizens in using Toronto’s ample public space for more, brightening and demonstrating the important role artists can play in helping neighbourhoods through public space projects. Previous work includes pop bottle planters and construction site painting, smaller projects making public spaces more usable and beautiful.

But when STEPS decided on doing something in St. James Town after the fire, the neighbourhood started throwing ideas out for how to bring a positive message of regrowth to the area, and the show everyone the St. James Town’s positive message of growth. Once the mural was decided on, certainly not the strangest of ideas tossed around, STEPS contacted local and internationally-renowned artist Sean Martindale for design and organization. With Martindale’s leadership, STEPS and local muralist company Toronto Muralists were able to convert the fire tragedy into something making people notice St. James Town’s spirit.

And while the Phoenix certainly represents this sentiment, the base of the mural shows the diversity and local participation of St. James Town residents. All along the base, young and aspiring artists from the neighbourhood were encouraged to add their own  stories, creating a mosaic of smaller paintings at the mural’s base that culminate in the larger Phoenix higher up which, for obvious reasons, couldn’t be completed by untrained professionals. Toronto Muralists, Jason Rouleau and Ryan Dineen handled the mural’s higher portions, using a bright and distinct colour palette to increase the project’s visibility.

To put the project is perspective, America’s tallest mural is located in Atlanta stands at 15 storeys. Asia’s tallest mural stands at 20 storeys tall, making Wellesley’s glowing Phoenix uses 29 of its social modernist housing project’s 32 storeys. At a full 10 storeys taller than its closest competition, 200 Wellesley is the tallest and brightest of each of these murals. Our team was honored to aid in the painting of this iconic Toronto mural.

The Phoenix, it seems, is already doing its job.