You are here: Home / chemainus

In 1981, Chemainus was a town on the brink not unlike many towns in British Columbia. The recession hit the town particularly hard and the town’s major employer, a single logging company, couldn’t sustain its work like it had for decades. If you have ever driven through B.C. before, off the beaten tracks of the Okanogan and Vancouver areas, you have most certainly past the ghost towns throughout the province. Places of former prosperity now entirely abandoned save for a small tour company. Chemainus was set to join these ranks. 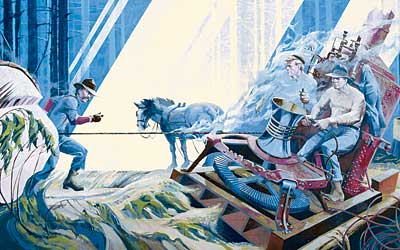 But rather than pick up and seek work elsewhere, the small town looked inwards and wondered how to diversify their community’s industries, to join the new post-Ford economy and not only survive, but thrive.

The answer came with murals, a way for locals to join the growing arts scene on Vancouver Island while bringing in tourists that come from around the world. The murals, like other similar projects, depict the history of the town along with the town’s identity. Local Indigenous tribes are found, along with the history of European settlement and development. The murals incorporate many distinctive styles rather than attempting a consistent look, proving the project relies on artistic vision just as much as community involvement. The town’s website discusses the increased artistic freedom they allow their muralists, which have created some unique pieces that even businesses like Subway are keen to encourage.

The town also emphasizes a unique aspect of street art different from art hanging in galleries: the openness of the process. Street art frequently requires artists to work out in the open and the piece itself can be seen in various stages from inception to completion. Chemainus encourages locals and tourists to interact and talk with the artists as the work happens. Such openness encourages interaction and, hopefully, can inspire others to learn more about street art and Chemainus.

The project originated with a series of grants from the Canadian government which helped Chemainus redevelop their image and attract tourism to the town. These grants have now since been used and Chemainus relies on its own economy to continue their murals and other tourism strategies. They continue to diversify, taking advantage of their location between Victoria and Nanaimo, and local prjects include sinking Boeing 737 to create an artificial reef.

Chemainus’ economic redevelopment has put them in a small collection of even smaller communities able to diversify successfully and their success has created a number of spin-off projects not only throughout Canada, but around the world. Stony Plain, Alberta; Moosejaw, Saskatchewan; Oshawa, Ontario, along with cities in Illinois, California, and Tasmania have all used Chemainus’ strategies to inject art and money into their struggling local economies.

It should be noted that Chemainus’ economic development has not entirely eliminated its dependence on logging, which still remains the cities biggest employer and sector. The murals, however, represent a successful intersection of art and economic revitalization, proving the power street art has to help a community both aesthetically and economically.

For more information be sure to check out their mural website, muraltown.com.